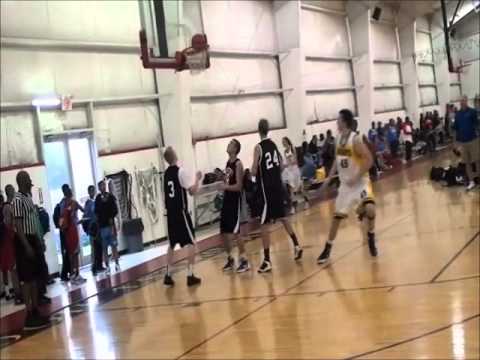 Michigan won’t extend scholarship offers to class of 2015 prospects until June 15th, 2013 but that hasn’t John Beilein and his staff from focusing on younger prospects this summer. Nate Fowler, a 6-foot-9, 235-pound center prospect is one young target that has caught Michigan’s eyes. Fowler plays for Moeller High School in Cincinnati as well as the same King James 15U AAU team that features fellow Michigan targets Luke Kennard and AJ Harris, and Michigan coaches have began recruiting the 2015 big man. We caught up with Fowler’s head coach at Moeller, Carl Kremer, to discuss Fowler’s game, development and a potential fit at Michigan.

Could you describe Nate Fowler’s game for someone who’s never seen him play?

“He’s a young kid, he’s only 15 years old — it amazes me how young these kids are when they start getting recruited. Probably the thing that stands out about him is that he’s incredibly fundamentally sound.We’ve had a lot of good players come through our program, and I’m not sure if I’ve seen a kid as fundamentally sound coming in. He has a great feel for the game, and he’s a highly intelligent kid. He’s got great hands. And, he’s just a massive kid. He’s 6-9 now, legit, and he weighs probably 230-250, somewhere in there. He’s going to get bigger. He’s not very mature, physically. He definitely has a chance to be 6-11, 7-foot.”

What are the strengths of Nate’s game?

“He just does things that you see so many of these big kids not do, and he does them so well naturally — the ball never goes below his nose, everything he rebounds he keeps high, he has a natural ability to outlet pass like no kid I’ve ever seen. Understand, this is a 15-year-old kid, but he reminds me of when I first saw Kevin Love playing, and his ability to rebound and start the break. He’s got that innate ability. He’s very good at keeping guys off him, as you can imagine, he just never gets out of position. He can finish with either hand, has a good feel for that. Not the most athletic kid in the world. Athleticism-wise, there are gonna be kids who are more athletic than him. So he kind of gets by being so fundamentally smart and having great hands. He’s a terrific passer, too.”

How heavily is Nate being recruited? Who have you heard from other than Michigan?

“His parents have started getting calls from Ohio State. We took him to a team camp not this past summer but the summer before, and he got offered on the spot by West Virginia. He was offered by Dayton. The great thing about Nate and his parents is that they aren’t really blown away by all of this, they really have great perspective. So, all these schools were calling him and wanting to bring him to bowl games last year, and he’ll do some of that. His parents have said they’ll do (some of the visits) but don’t advertise it, we want our kid to be a normal kid. They’re very grounded. He wants to be an engineering student, he’s a fantastic student. He wants to play basketball somewhere where he can be an actual student, as well.”

How do you like coaching Nate? Is he coachable?

He’s a little quiet, but I think that’s just a product of him being so young at this point. He gets it. He just gets it. He’s a real disciplined kid. If you explain something to him, he’s got it right now. We’ve actually got another 5-man who’s going to be a senior, he actually got a D-I offer himself, but we just want to make sure we can play with both of them. I’ve never played with two centers. I generally like my 4-man to be more of a guy who can shoot the ball, more of a perimeter player, really, as far as skill set. In adjusting this summer, Nate’s actually the guy I have playing outside more, because he can just catch the ball in the middle of the floor and really get it to where it needs to go — either down low, or get the ball reversed. He can catch it against the press because he’s so calm, he plays with a sense of calmness. For a kid who’s 15, going into his sophomore year, he’s pretty advanced.

How do you see Nate fitting into Michigan’s system?

“I think he’s a natural fit for U of M. I’ve known coach Beilein for a while. He recruited one of my guys back in 2005 while he was at West Virginia. I got to know him pretty well, he came in for some recruiting visits. Over the years, we’ve stayed in contact, and I know John pretty well. I know Jeff Meyer very well, and I know Lavall Jordan because he played at Butler when one of my guys went there. I know the staff well and I know the way John wants to play. I truly think he is one of the best coaches in America, I assume you guys know that because you see him every day. Nobody gets more out of his players than he will. I think he’s a perfect fit for Michigan. Nate would be great under John Beilein. He can really shoot the basketball. John, of course, has done great with big guys who can shoot the ball. When I first saw (Fowler) he reminded me of Kevin Pittsnogle a little bit. It’s an area of his game that he hasn’t really been asked to show, but I see him in workouts and I see some potential for that. I think he’s a great fit for how Michigan plays, and I think the University, academically, a lot of things look good about Michigan. But the bottom line is, he’s young. He’s gonna handle this the right way and not let it dominate his life.”