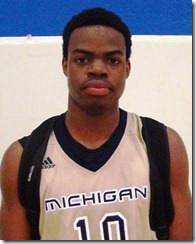 The point guard position has been synonymous with success in John Beilein’s offense the last two seasons. Darius Morris and Trey Burke developed into stars with their ability to utilize the pick-and-roll and power Michigan’s offense. Burke opted to return to school this spring and will play at least one more season in Ann Arbor but Michigan’s future point guard, Derrick Walton, has emerged into a star on the summer AAU circuit.

Walton’s AAU coach, Damon Alison, took the time to discuss Walton’s growth with UM Hoops at the Adidas Invitational earlier this July. Alison focused on Walton’s work ethic and improving defense, reiterating that Walton not just one of the top prep guards in the state of Michigan but the entire country.

How long have you coached Derrick and what do you think of his game lately, his strengths and weaknesses?
“I’ve coaches Derrick for two years at this point. The thing I think about his is game is he has the confidence now that he knows he’s unstoppable. I think he knows that there pretty much isn’t anyone that can stay in front of him, and he’s probably the best passer on the circuit.”

Can you talk about the progression in his game, especially within the last few months?
“He’s gotten tremendously better. He works hard every day, getting his shots up, working on his step back, working on how to finish in the mid-range because he knows that he’s going to run into 7-footers, and 6-foot-9 and so forth, so we try to make sure he’s got a little floater coming and a higher arching jump shot. So he knows what’s to come.”

How important is it for him to prove he can start right away at Michigan?
“Not only for coach Beilein, but for himself that he has to see some of the players he has to play against when he gets to the Big Ten and playing at the next level. It’s all about the Kasey Hills, and how does he match up with him when he plays that guy, or whoever. Isaac Hamilton last night, he needs to make sure that he’s on their level and see what they can do versus what he needs to work on. I think that’s why the circuit is important for him now.”

Derrick is one of the best players on the circuit at making his teammates better. Can you talk about his unique ability to do that?
“I just think when it’s his time, he knows when it’s his time to step up in games. I think he really knows he has to keep everybody else involved or else he could go for 40 or 50 on any given night, but he has to keep everybody else flowing in order to make that happen.”

How important is playing tenacious defense to Derrick, and can you talk about what makes him so good defensively?
“He’s probably one of the best guys to read the passing lanes that I’ve seen. He gets a lot of his steals by reading what the player is going to do and I think that comes from being a really good point guard because he knows what is going to happen next. And then this year, he’s really worked on sitting down on defense, because that’s the kind of thing that Trey Burke does. He kind of idolizes Trey Burke, so that’s what he’s looking at.”

How important is it for a kid like Derrick, who’s rising up the recruiting ranks, to stay grounded and stumble through this whole process?
“His family is humble. I had a conversation with his dad awhile back about his family and how they keep him humble. There’s never a situation that he gloats about. He hit the game winning shot at Spiece and he walked off. Everybody else was hollering and screaming and he walked over and shook hands like ‘what’s the next play.’”

Biggest thing still to improve?
“I believe in just defense and rebounding, you can never have enough of. So I think if he continues to work on those things, his offensive side is unstoppable, I believe. Every time he shoots it, I believe he’s going in.”

What do you think Derrick’s potential is for his last year in high school, and at the next level?
“At the next level, I think as long as he’s in the right situation with coach Beilein, I think he can excel to the maximum potential of even maybe getting to the highest level, it’s up to him. At high school, I think him and Monte Morris will be a fun game to watch. I don’t think there’s any team in Michigan that can check them.”