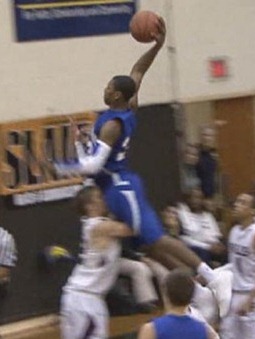 Glenn Robinson III arrived in Ann Arbor this summer as a consensus top 25 recruit. He rose from fringe top-100 player to national star after his commitment to Michigan and is the highest ranked recruit that John Beilein has signed throughout his career. Tom Brew had the opportunity to follow Robinson’s senior season with an all-access look at Lake Central for his book, A Season Inside: Lake Central Basketball. Brew took the time to discuss his project and what Michigan fans should expect from Robinson in Ann Arbor.

How long did you follow Lake Central? Explain the book project, how it came to be and how it turned out.

I spent all of this past 2011-12 season with the team, from Day 1. I got laid off from my job as assistant sports editor of the Indianapolis Star last fall and I wanted to stay busy while I was looking for another job. The original intent was to just cover the team as if they were the only game in town for my website (tombrewsports.com) but late in the year one of the parents said something about putting all of my articles into a scrapbook. That’s when I decided to do something more elaborate. I had written a few columns along the way that weren’t on the website and had kept of journal of sorts on some background things. So I figured I would do something nice and give the people on the team and in the community something to remember this season by. It was an unusual team, with a bunch of great kids and great coaches. It was fun, and it’s been well received so far. It’s 128 pages and I bought about 50 pictures to go with all my stories. I did it in all color, so it looks great. Even if you’re not a fan of that particular school, I think it’s a good read on how a season plays out.

Obviously the book covered Lake Central as a whole but what are your thoughts about Glenn Robinson III as a basketball player and a person?

Well, Glenn is certainly the focal point of the book and readers will get to know him pretty well page after page. I think he’s a great player, one of the best wingmen I’ve ever seen in high school. He outscored Gary Harris (Michigan State) and JP Tokoto (North Carolina) in their head-to-head matchups and I always thought he was the best player on the floor in every game I saw. And as good a player as he is, he’s an even better person. He works extremely hard, he’s a great teammate and he really became a great leader during the course of the season. We probably had a hundred conversations during the season and he was great every time.

What’s the one area where you saw the most growth in Glenn Robinson III as you followed LC?

Two things. He really matured into a great leader. For as good as this team was (21-3), it was a very young team. The next two most important players (6-7 center Tyler Wideman, who has interest from Michigan and 5-10 point guard Tye Wilburn) were just sophomores and Mike Miklusak, a junior who’s emerged into a very nice player, had no varsity experience before this season started. Glenn took them all under his wing and really pushed them. Glenn is a great practice player and they followed his lead. Their coach, Dave Milausnic, was always happy with how well this team practiced all season. They got better every day, and Glenn’s leadership played a big part in that. Secondly, I really saw a lot of improvement in Glenn’s defense as the season wore on and the games got more important. With his length and his quickness, he can guard just about everybody. He guarded big men but even shut down lightning-quick point guards when he had to. Hyron Edwards (East Chicago, 2015) is already getting Big Ten offers and Glenn completely took him out of his game. I think that will translate well to Michigan, too. He’ll be able to guard anybody, one through four, even at that level.

What do you expect from Glenn as a freshman in Ann Arbor, do you think he’s an instant impact player?
I don’t think there’s any question he’ll have an immediate impact. He knows how to score but he also does a great job of keeping other people involved. Of course, Michigan’s offense is a perfect fit for him, too. He’ll be able to attack the basket and he can shoot. His three-point numbers weren’t what he would have liked last year, but I still consider him to be a good perimeter shooter. He’s been working real hard on that part of his game too. I really like his mid-range game. He does a nice job of finding spots to score from, and without all the double- and triple-teams I’m sure he’ll be a double-digit scorer as a freshman.

How would you describe Glenn as a leader?
He was always quiet before his senior year, moreso leading by example, but that changed his senior year. I think a lot of that came from having more confidence, too. Without being a bit arrogant, he’s very confident in his game. He has a great deal of respect for his teammates at Michigan and the guys he’ll play against in the Big Ten, but I know he’s going into this season knowing he’s going to play a big role. He’s always had this huge spotlight shining on him, being Glenn Robinson’s kid, but he handles all of that very well and he wants to make his own history. There’s a lot of good chapters in the book where he talks about emerging from that shadow. I think Michigan fans will enjoy seeing that side of him.

You’ve seen a lot of great athletes in your career, how does Glenn’s athleticism compare to some of the best?
He’s the best 6-6 kid I’ve ever seen on the high school level because he can do so many things. He’s quick, he can jump through the roof and he’s got great basketball instincts. One game this year against Valparaiso, he had 24 points and 16 rebounds, a bunch of steals and he grabbed every loose ball. That was the day he found out he didn’t make the McDonald’s All-American game and he was upset. He had something to prove, again. He was the same way in the all-star games he played in after the season in New Orleans and San Diego. He wanted to prove he belonged, and he played great. Watching him shoot up all these recruiting rankings was very rewarding to him.

Did you ever meet up with Glenn and Mitch together? What do you think about Michigan building somewhat of a pipeline to The Region with Novak, Glenn, Mitch and Spike? Does that sort of thing go noticed in The Region?
I met Mitch over Christmas when he came to a Lake Central game. He’s a nice player, too, obviously. Northwest Indiana always has a lot of great players and it’s been an important area for all Big Ten coaches to recruit. From there it’s probably easier to get the Ann Arbor than Bloomington. But Michigan did a great job in recruiting him, too. They took a chance before anyone else in the Big Ten, and it certainly worked out great for both Glenn and Michigan. There’s a couple of great chapters on his recruiting. He’s dramatically better now compared to two years ago when he committed and so is Michigan. Region people certainly take notice and of course it helps that they can watch every game on TV now with the Big Ten Network. There’s a lot of Michigan fans in Northwest Indiana, and there will be even more now.

Any final last words for Michigan fans about Glenn and what to expect?
They’re going to love him. He’ll work his tail off and he’s got a great personality. He’s going to help him win a lot of games this year. I really like the makeup of this team and I see them doing big things this year, with Glenn playing a very prominent role. He’s that good. And you media guys up there will like him too. He’s a great interview.

How can people buy the book?
In Indiana, they are available for sale at Lake Central High School ($10.00, with a portion of the proceeds to benefit LC scholarship programs) and I can mail them to anyone out of town. All the information is on my website (tombrewsports.com) or people can e-mail me directly at tombrewsports@gmail.com I’ll be happy to ship them right out.