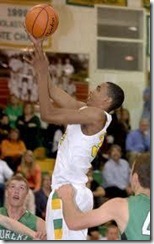 FORT WAYNE, Ind. — It was a busy day at the Spiece Fieldhouse Friday for the GRBA Nationals in the final weekend of the NCAA live evaluation period. There were many Michigan targets in action, and UMHoops was on hand to catch most of them. The focus of the day was on two of the three 2014 prospects with Michigan offers — Keita Bates-Diop and Trevon Blueitt.

Bates-Diop played twice on Friday, leading the Wolves to a pair of victories and a perfect pool play record. In the first game of the day, he was dominant. He looked for his shot on the perimeter and was knocking down 3-pointers consistently. He was also very strong driving to the basket — an area of his game that has improved drastically even from just a year ago. He finished two monster slams in traffic, showing off his athleticism and the aggressiveness everyone has been waiting to see from him.

On the defensive end, his hands were extremely active. Bates-Diop started and finished plenty of fast breaks because of his ability to strip the ball and use his long arms to get into passing lanes. He finished the first game with 18 points. The Illinois Wolves’ second game, against The Family, Bates-Diop wasn’t as dominant a force but still made his presence felt, especially on the defensive end. He wasn’t looking for his shot like he did in the first game and finished with 11 points. Despite a slower performance, he made a terrific pass in the final seconds of the game that led to the game-winning bucket for the Wolves.

John Beilein was in attendance for all of Bates-Diop’s games, and strong mutual interest is no secret. Bates-Diop said he has maintained steady contact with both Beilein and Lavall Jordan since he received a Michigan offer. Dave Kleinschmidt, Bates-Diop’s Illinois Wolves coach, said he has had regular contact with Michigan, adding, “They love Keita. I know they really want Keita. They’re doing a great job recruiting him.”

Trevon Blueitt was also in action and although he was a bit fatigued coming off the Nike EYBL circuit, he still managed to impress. It’s clear Blueitt has been working hard on expanding his game beyond shooting. In the first game I saw, he spent most of his time going after rebounds and getting putbacks in the post, both of which he did effectively. Blueitt helped his Spiece Indy Heat team to a victory over The Family in the first game, scoring 18 points in the effort. He was less of a factor in the second game I watched, and the last game of the night, against MBA Select. However, it was evident he simply didn’t have any legs for the second game — he was missing short on his shots and wasn’t getting much lift. Beilein was in attendance for both of the Bluiett’s games on Friday, along with a litany of other coaches, including Matt Painter of Purdue and Mike Brey of Notre Dame.

Blueitt said he talks to Michigan coaches about two to three times per week, adding, “As far as I know, they’ve come to every single one of my games since the offer.” He’s planning on visiting Illinois and Kansas State in August.

A handful of other Wolverine prospects were in action as well. Here are some notes on those prospects and performances in Fort Wayne.