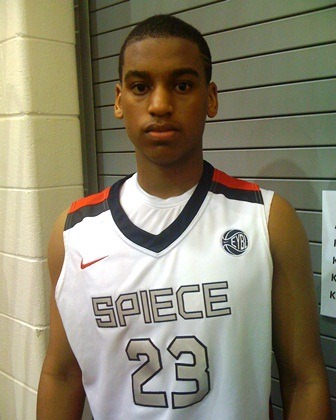 FORT WAYNE, Ind. — Bracket elimination play tipped off on Saturday at the GRBA Nationals at Spiece Field House. John Beilein stuck around in Fort Wayne to keep an eye on a number of 2014 targets while evaluating some younger players as well during the second to last day of the summer evaluation period.

Trevon Bluiett scored 10 points in his team’s victory over MBA Select in the afternoon, knocking down a couple 3-pointers in the first half as well as finishing a few shots in the paint. Bluiett continues to improve his all-around game and defense. This weekend was a good opportunity for him to do that because he didn’t appear to have the legs to take all of the long-distance shots he’s accustomed to taking for his team. It’s been a tough but extremely productive summer for Bluiett.

Scoring 10 points of his own, Keita Bates-Diop didn’t stand out quite as much as he did yesterday but still managed to impress. He didn’t play as much on Saturday afternoon, with his coach opting to give him some rest. Bates-Diop spent most of the weekend showing off his improved aggressiveness inside, and although he still needs to improve on his finishing ability, he continued to show off that newfound aggressiveness. He has excellent body control, just needs to work on his touch around the rim. Those skills will come but his long-range jumpshot is still extremely consistent.

Both Bluiett and Bates-Diop remain alive in bracket play with their respective teams and will play semifinal games at 9:15 on Sunday, looking to cap the July evaluation period with one final championship.

John Beilein also spent some time watching younger teams from the state of Michigan. On Saturday morning Beilein watched both The Family 16U and 15U squads at an off-site gym. 2014 point guard Edmond Sumner had a big game in front of John Beilein for The Family 16U, scoring 28 points and showing off an array of skills. The lanky guard displayed impressive handles on the perimeter and a lethal 3-point shot. What was most impressive about him, however, was the way he took the ball to the hole with consistency. He was always looking for contact despite his slight frame and finished well at the rim. Sumner said he has been hearing from Wake Forest, Xavier, Iowa and Detroit, but hasn’t heard anything from Michigan as of yet. Sumner is definitely a name to at least remember this year in the state of Michigan.

One name who has been somewhat forgotten this summer is Matt Holba. Holba, a Chesterton native and 2014 prospect, missed most of the summer with a broken hand. He was finally healthy and back in action with his Meanstreets squad in Fort Wayne. At 6-foot-6, Holba’s a very athletic player with size who can finish at the rim — he had a very impressive two-handed slam in traffic on Saturday — and he’s still developing his perimeter game. He’s been working on his shooting and handles. Holba was in Ann Arbor for a visit during football season this past year (A trip he described as “awesome”), and said if the Michigan coaches will have him again he’d love to take another visit. “If they’re still looking, then yeah (I’d like to take another visit),” Holba said. “It all depends on how I play, really.” By the looks of it, he’s on the right track — he had 11 points and a few blocks under Beilein’s watchful eye on Saturday.

2014 shooter Peyton Allen was held mostly in check in the Southwest Illinois Jets’ game against Meanstreets on Saturday. He had a few tough finishes at the rim and a couple good midrange jumpers, but he was plagued by turnovers as the Jets were sent packing by Meanstreets.