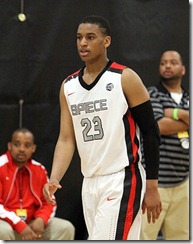 UMHoops was on hand to catch a handful of Michigan targets this weekend at the GRBA Nationals during the final week of the live evaluation period. Here’s a scouting recap of what each player showed during competition, some while being watched by John Beilein.

Trevon Bluiett (2014, SF) As has been mentioned this weekend, Bluiett was consistent but seemed fatigued this weekend at the GRBA Nationals. This is understandable at the end of a busy July that saw Blueitt participate in two of the top AAU tournaments in the country, the Adidas Invitational and Nike Peach Jam. However, Bluiett remained invaluable to his team even if it was hard for him to find his legs at times. Bluiett is an extremely smart player who has a great feel for the game; he makes good passes, doesn’t turn the ball over, he takes good shots, and he has developed a nose for the ball when it comes to rebounding. Instead of focusing on shooting, Bluiett worked this weekend on working inside and going after rebounds, and to that end he was successful. While Bluiett wasn’t at his most dangerous, it was impressive to watch him continue to provide significant contributions for his Spiece squad.

Keita Bates-Diop (2014, F) As with Bluiett, much has already been said this week about Keita Bates-Diop—however, it is worth repeating. During games this weekend, Bates-Diop was at worst a dogged rebounder and defender without much aggressiveness offensively, at best an absolute force at both ends of the court. His frame is incredibly imposing and he has definitely grown into it—he uses his long limbs to his advantage on defense and offense, and no one gets nearer to the rim than he does when going up for a rebound. He displayed shooting range from deep that was so consistent it would have been nice to see him launch more often. He was clearly working on his ability to take the ball to the rack, which has greatly improved. He is amazingly quick for his size and length and is a nightmare to guard. He can rise with the best and gets to the rim with ease. He still needs to improve his finishing ability and get stronger at the rim, but for now he’s in an excellent position to work on those things. It was a good weekend for Bates-Diop, at times spectacular–he had a couple of in-traffic dunks that brought the house down in one game I watched.

Prentiss Nixon (2015, G) You aren’t going to see a smoother jumpshot from someone as young as Prentiss Nixon. He can flat-out shoot the ball, but as his coach told me, he’s been working on expanding other areas of his game. Nixon’s jumper is really smooth–it looks effortless, even from way back–and shockingly consistent, but he certainly has room to improve. He worked on his passing ability this weekend as well as his penetration. If Nixon wants to become a complete player, he seems to have all the tools. While he isn’t very tall (6-foot-1) he has explosive quickness that allows him to get by almost anyone. Once he learns how to hone that talent into a skill and use it effectively, watch out. He is an exciting prospect to keep an eye on, and it appears lucky that Michigan got in on him early — he’s been blowing up this summer, mentioning recent contact from UCLA.

Peyton Allen (2014, G) Every time we see Peyton Allen, I’m always impressed with his tenacity and aggressiveness. He never stops trying to get to the cup or looking for ways to score. He plays with a great offensive mindset. He has the big body to usually get where he wants in the paint, though he could stand to get stronger, as he’s said. His shooting stroke is usually very good, though his shots weren’t falling when I watched him and he wasn’t taking many chances from long range. One area of his game that could use improvement is his handle. He needs to be stronger in possession of the ball–not just going up, but when he’s out on the perimeter. Against Meanstreets on the Saturday, Allen ran into serious trouble against their physical defense. Allen is a promising prospect with a great jumper and a lot of ability, but he still has a few areas to work on.

Tyler Wideman (2014, F) Tyler Wideman has been a bit of a mystery this summer. After many expected a big summer from the forward prospect, he hasn’t emerged nearly as much as many hoped. I wasn’t able to see him in action much, but it seems after watching him a month ago and this weekend that he may be working too hard on his perimeter game and not hard enough on his bread and butter–rebounding the ball and playing strong in the paint. Even though he’s undersized (height wise) for a big, he the frame to play inside and can hold his own physically. I would say he should focus on getting very, very good at one or two things rather than try to be a stretch forward. His skills would be more evident and it may improve his focus. He is certainly a player with a lot of tools, and one Michigan has extended an invitation to visit next month.

Jalen Coleman (2015, G) Playing up alongside Trevon Bluiett on the Spiece Indy Heat 17U, Jalen Coleman was impressive, especially for a 2015 prospect. He played with energy and confidence. He has a long frame for a guard and is very athletic. His game is versatile and he was able to contribute to the team in many different ways. He didn’t appear to be looking for his shot and played more of a facilitator role, but he was all over the court and made some very nice plays. He was confident passing the ball and finished well in the paint among some very stiff competition. A lot of Big Ten schools are already involved with Coleman and Michigan is working to get him on campus this fall.

Edmond Sumner (2014, PG)  Sumner isn’t picking up Michigan interest at this point but he played well in front of Michigan coach John Beilein. Edmond Sumner is a short but lanky point guard out of Detroit Country Day playing for The Family. John Beilein watched the 6-foot guard play in the auxiliary gym at Northside High School on Saturday and the youngster lit it up, scoring 28 points in a victory. Sumner is fearless driving to the rim and has a smooth jumpshot from outside. He can score in plenty of different ways, but on the defensive end he has work to do, mostly because of his slight frame. He’s very quick and his handle is solid. He’ll be one to watch as he develops his game in the next couple of years and grows some — he has serious talent, and he’s right down the road.

Matt Holba (2015, F) The Chesterton, Indiana native was also in action in front of John Beilein on Saturday and while he didn’t score quite as many points as Sumner, he was impressive. Holba is a big body at 6-foot-6 and he’s still learning how to play on the perimeter. But he can move very well, has serious athleticism, and has made great progress in his game this summer. He’s a dangerous player around the rim and is developing a midrange shot. He has long arms and is very active on defense but his rebounding could use work. Michigan has shown significant interest in Holba, and it appears to be mutual. If he can make strides to improve his all-around game, he’ll be one to watch in the future.