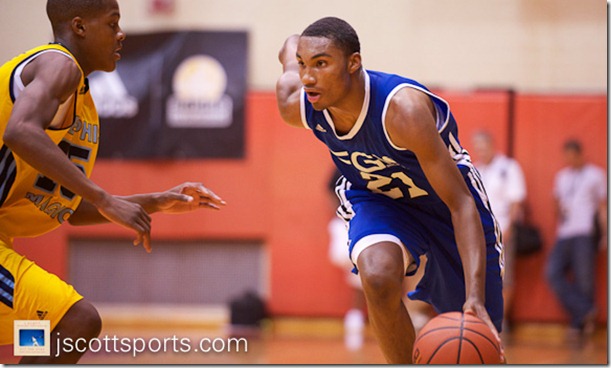 A pair of 2013 Michigan commitments put together big weekends in Las Vegas to end their AAU careers on a high note. Derrick Walton carried the Michigan Mustangs all the way to an Adidas Super 64 Championship while Zak Irvin led the Eric Gordon All-Stars to the quarterfinals of the same event.

Both players impressed a host of national scouts in attendance and likely secured their national spots in the top 50 when the smoke clears this summer.

Both Walton and Irvin were singled out as top performers in ESPN’s Las Vegas recap. Rivals also praised Walton’s play:

Setting the tone for the Mustangs was four-star point guard Derrick Walton. The Michigan bound guard was an absolute stud on both ends of the floor. He went right at defenders’ chests on drives, dimed up his teammates with pinpoint passes, defended at a high level and generally played with a level of confidence that allowed him to do whatever he wanted to do.

Dave Telep went as far as hinting Walton would earn McDonald’s All-American consideration in the spring.

Zak Irvin’s scoring prowess is now a nationally accepted comodity. He helped the Eric Gordon All-Stars to the quarterfinals in the Adidas Super 64 in Las Vegas with more of what we’ve seen all summer. ESPN:

Irvin has the quintessential frame for the wing position at the next level. He did most of his work off the dribble as he converted a number of pull-up jump shots, getting great lift on his shot. He floats effortlessly while letting his shot go, and it’s always soft. Defensively, he did a nice job of keeping ESPN 100 PG Kasey Hill (Eustis, Fla./Montverde) out of the lane.

Dave Telep also fired off a series of tweets, questioning the number of once highly ranked 2013 prospects in the state of Indiana that had failed to progress over the years. He also made sure to point out that Irvin wasn’t in that group.

2015 combo guard Jalen Coleman had a very impressive July with the Spiece Indy Heat. He capped off the summer with a strong weekend at GRBA Nationals while playing all the way up with the 17U Spiece team in the event. Michigan coaches have watched Coleman regularly this summer and the attention is going to pay off with a visit. Kyle Neddenriep of the Indy Star reported that Coleman plans to visit both Michigan and Michigan State on Monday.

Rivals.com reports that Michigan is tracking yet another player from the All Ohio Red AAU program. 6-foot-7 forward Nigel Hayes has put together a strong summer and added offers from Minnesota and Wisconsin, Rivals reports that Ohio State, Michigan, Iowa and Michigan State have also taken an interest.

Hayes has a man’s body at 6-foot-7 and 225 pounds of rock solid muscle. He’s a high level athlete with powerful explosion around the rim, a non-stop level of energy and a tough guy mentality that intimidates opponents who are not as mature as he is physically. Capable of playing small forward, power forward or even center, Hayes has a versatile offensive skill package that allows him to handle the ball, drive it from the wing or high post, shoot the mid-range jumper and score it around the rim. A high level rebounder and excellent interior defender, Hayes’ toughness is easy to spot with the way that he fights for loose balls on the court. College coaches from the previously mentioned programs feel like he is a prospect who will continue to improve over time, and despite being a little undersized for the post at their level, should be an excellent collegiate player.

Jae’Sean Tate recently added an offer from Ohio State and the hometown school could be tough to beat. On the hardwood, he continues to impress:

Tate’s exploits have been well documented recently and his effort on the court is unmatched. He is a physical presence who rebounds and scores. His elite athleticism combined with his motor make him a weapon that is hard to contain in today’s grassroots scene. He scores most of his points in the paint on post-ups, short jumpers or slashes to the basket.