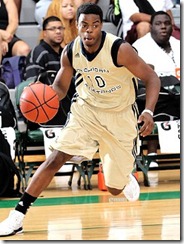 A pair 2013 Michigan commitments are in California this weekend for the Adidas Nations Global 2012. The event is the finale of the Adidas grassroots summer program and features four American teams facing off against international squads at similar age groups.

Derrick Walton and Zak Irvin will both be playing on the USA 2014 Red roster. Both Wolverine commitments participated in Adidas Nations events throughout the summer and Global 2012 will likely mark the end of both prospects grassroots career.

Here’s an interview and brief highlight film of Irvin in action at previous Nations events:

Practices, pool play and college counselor games will be held August 3-5 in Garden Grove, California. The championship will be played at Long Beach City College on Monday, August 6 at 8 p.m. eastern and broadcast live on CBS Sports Network.

The complete schedule is available here.