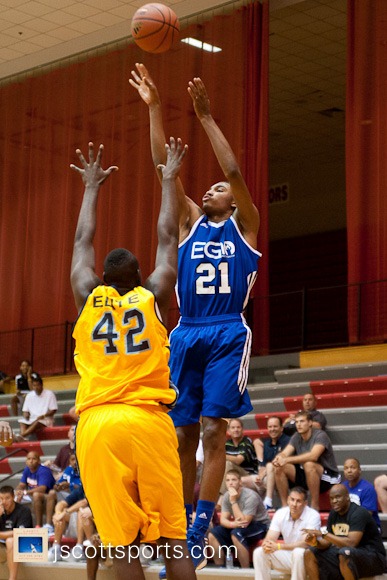 Zak Irvin’s strong summer is finally over and the future Michigan wing guard picked up his fair share of positive ink in recent days. Both Rivals and ESPN noted him as one of the top performers of the summer period.

Rivals listed Irvin as one of 12 top-150 prospects that boosted their stock in the summer period, focusing on Irvin’s growth spurt:

Michigan has landed another guy who isn’t only a fit for its system, but also is very talented. A growth spurt has him pushing 6-foot-7 and to go along with that he’s become a much better ballhandler and isn’t nearly as prone to settle for deep jumpers.

I saw the Michigan commit numerous times at the adidas Invitational in Indianapolis. He has a combination of athletic ability, skill and feel for the game that helped him dominate the action, but he utilizes his different skill sets to operate within the flow of the game. His long-range jumper is accurate, and if a defender gets too close, he will drive to the basket with a long first step. Plus, he has the size to score over defenders in the painted area. When he gets out in transition, he can spot up for a jumper or cut to the basket for a high-flying finish. He also moves without the ball by cutting and using screens to free himself. Overall, he is a clutch performer, arguably the best player in Indiana and the player who best helped his team win all summer.

Irvin was also profiled by Rod Beard in the Detroit News in an article that focuses on Michigan’s early identification and prioritization of Irvin and his subsequent rise up the recruiting charts. Dan Dakich is a fan:

“Irvin is probably the most improved kid in the state this year. He had a great year in high school and he’s carried it over to AAU. He can really shoot, he’s athletic at 6-7 and he’s a lot like Hardaway,” said Dan Dakich, who coached at Indiana University and now coaches an AAU team in the state.

Michigan, Illinois and Purdue are three of the first schools to show consistent and steady interest in Keita Bates-Diop. Those three schools are likely to be involved in Bates-Diop’s recruitment until the end but now several new suitors are throwing their name in the ring. After a productive July evaluation period, Bates-Diop added offers from Marquette and Ohio State and has received interest from Duke, Kansas, Kentucky and Michigan State. The lanky combo forward is also eying a visit to Florida this week while on vacation in the area.

2015 phenom Luke Kennard made an unofficial visit to Kentucky. Kennard has added an Ohio State offer this summer and Michigan has made a very strong impact in his recruitment, hosting him on multiple unofficial visits. However, Kentucky is a nearby option that has reportedly been a childhood favorite of Kennard growing up and the Wildcats should be a factor in his recruitment.