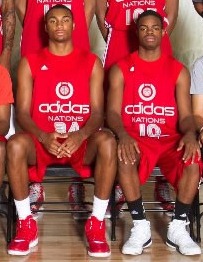 All of the tournaments, games, travel and camps are finally coming to a close. The live evaluation period ended a week ago but there was one more prestigious event to be played on the calendar this summer: Adidas Nations Global 2012.

A pair of Michigan commitments, Derrick Walton and Zak Irvin, participated in the event which matches four top teams of American players against some of the best young talent from across the world. Originally scheduled to play together with Walton, Irvin’s USA 2013 Red team was shorthanded after Walton severely rolled his ankle in the first session of camp.

Irvin was up to the challenge, even if he wasn’t quite able to guide his squad to the event final. Team USA Red finished the event 2-2 and failed to advance to the final day of play. Irvin averaged 14.3 points per game throughout the event.

Perhaps Irvin’s best performance was 6-of-9 (2-3 3pt) shooting game en route to a team-high 16 points in a narrow loss to Australia.

The book on Irvin has been pretty well established: a scoring threat with great shooting and length on the wing. Rivals’ AJ Stokes agrees:

Four-star wing Zakarie Irvin provided a steady scoring presence from the wing and has the ability to score at a high-level.

The strong Adidas Nations showing bookends a tremendous grassroots career for Irvin, who has managed to steadily rise up the recruiting charts this summer despite being a known commodity at a young age. Irvin is growing physically but also mentally where he’s developed into a more consistent and aggressive player on both ends.