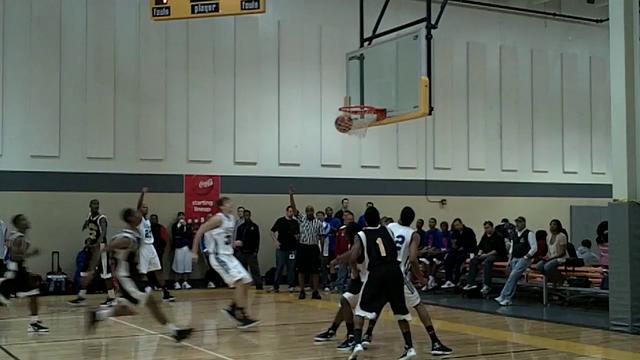 Zak Irvin has become one of the premiere players in the class of 2013 and one of the jewels of Michigan’s 2013 recruiting class. A year ago, Irvin was one of a multitude of wing players on a talented but hotly debated Eric Gordon All-Stars AAU team. That team boasted five high major wing players and most weren’t quite sure who was the best of the bunch. Was it VJ Beachem’s raw athleticism and potential or Devin Davis’s complete game? Colin Hartman’s shooting prowess or Zak Irvin’s scoring ability? The All-Stars dominated the AAU circuit but the debate raged on, who was the best player on that team? By August 2012 the answer is clear: Zak Irvin. Irvin is likely the top prospect on his AAU team and arguably the top 2013 prospect in the state of Indiana.

After the jump we breakdown Irvin’s summer including what he proved, what questions he has to answer, a summer highlight compilation and the top moments of his summer.

Irvin proved he belongs in the conversation with the top-tier high school players in the country. He played on one of the best AAU teams in the land in the Eric Gordon All-Stars and stood out as the go-to offensive option on the perimeter. He is long and quick with above average athleticism but truly stands out with his pure scoring ability. His jumpshot is smooth and accurate from anywhere on the court, and when he gets hot there is no stopping him. His handle is quite good for someone his size, and it got better as the season went on – even allowing the 6-foot-7 wing to cameo as a point guard often.

Irvin is a consensus top-75 player and don’t be surprised if he sneaks into the top-50 when ESPN and Rivals update their rankings post-July. He impressed along the way while playing in some of the top Adidas sponsored tournaments of the summer circuit. He qualified for the Adidas Nations Global 2012 event after strong showings at Adidas Nations training camps before averaging 14 points per game despite playing on a shorthanded team.

Irvin entered this summer free of the inhibitions and distractions that come with playing for an offer and making a college decision and he made the most of it.

Like almost every 6-foot-7 high school wing player, Irvin still needs to add bulk and muscle to his frame before reaching the Big Ten level. That development is sure to come with a year of maturity and time in the Michigan weight room next summer. The question that faces Irvin during his high school season is how can he react to being the go-to player on his Hamilton Southeastern squad. Irvin has had the luxury of playing on extremely talented squads. His AAU team featured an array of talented high major players and he was always able to defer to Michigan State bound Gary Harris on the prep level.

How Irvin reacts to his new situation will be telling. The opportunity could magnify one of his primary weaknesses, shot selection. Or it could force him to develop into the complete player he needs to become. Given his size and quick release, Irvin has the ability to get his shot off at nearly any time over any defender, but all too often he settles to be a shooter not a complete scorer. Measure Irvin’s progress in the next six months not by his ability to put up huge scoring totals but by his ability to continue to progress as a playmaker, driver and complete player.

The Eric Gordon All-Stars had a number of strong showings at prestigious AAU tournaments with championships at the Adidas May Classic and Indyball.com Shootout and strong showings in Las Vegas and at the Adidas Invitational but Irvin’s best weekend might have come at the Adidas Spring Classic. His EG10 squad was eliminated in the semfinals by eventual champions Wisconsin Swing but Irvin was impressive enough to still take home MVP honors. Irvin carried his team to the last day, scoring 23 points in the loss to the Swing, and carried that offensive momentum into the rest of the summer.

Irvin always has been a talented player, but he has become much more consistent and productive from what I saw at the adidas Invitational. The Michigan commit has improved to the point at which he is the best player in Indiana and one of the very best in the Midwest. He can play either wing position (SF or SG) and is a solid athlete who is much better off the dribble now with his improved handle. He can create space off the dribble and hit shots from midrange all the way to 22 feet. He is also better as a defender. He has nice length and athletic ability. Irvin is easily a top 50 player now and should be ready to play immediately at Michigan.

Irvin is not only one of the best wing guards in the entire country, he’s one of the best fits for Michigan’s offense. The Wolverines have developed somewhat of a reputation as a point guard school with the quick developments of Darius Morris and Trey Burke but John Beilein’s offense will always be dominated by complete wing scorers. Think Mike Gansey, Manny Harris or Tim Hardaway Jr. A scoring and playmaking wing with range to the three point line is one of if not the most important elements of Beilein ball. Zak Irvin has proven that he’ll be ready to fill that role when he steps on campus in Ann Arbor.