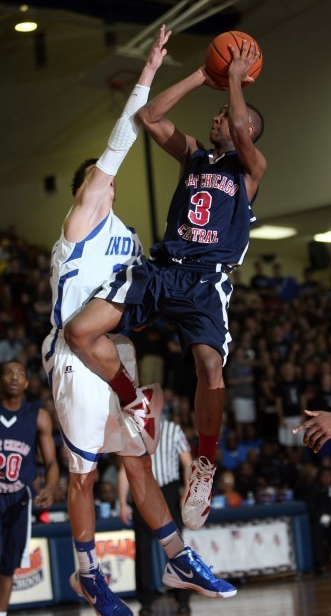 Hyron Edwards emerged as one of the top point guards in the class of 2015 this summer. The East Chicago, Indiana native is a top-25 player nationwide and was recently slotted at No. 11 in ESPN’s latest ranking update. He plays AAU ball with the powerhouse Indiana Elite and drew the watchful eyes of Michigan coaches throughout the summer evaluation period. Already holding offers from Indiana and Purdue, Edwards is a strong bet to add a Michigan offer on June 15th of 2013 when John Beilein first extends scholarship offers to class of 2015 prospects. Edwards visited Michigan on Saturday and UM Hoops caught up with him Monday afternoon to discuss the trip.

What did you guys do on the visit?

“They showed me around the school and the campus and then we went out to eat. They talked to me about their style of play and about the offense they use.”

What was your impression?

“I liked it. It was great. I was in the gym and then we went to where they study. It’s a lot of isolation. There weren’t any distractions or anything like that so they can get their work done. And when they get their work done, it’s time to go ball.”

What did you think of the new facilities?

“Actually I liked it, it was pretty good.”

Which coaches did you meet with during the visit?

“I met with all the assistants and coach Beilein too, so I talked to all of them.”

“Just about how my AAU season went. We did pretty good. They talked about their school, academics-wise, their style of play, stuff like that.”

What was your impression of the coaching staff?

“The Michigan staff is great. All those guys are fun and fun to be around. They like to joke around so I liked that a lot.”

How does the Michigan visit compare with others you’ve taken (to Indiana and Purdue)?

“They compare pretty well. They all went over the same things, went all over campus, talked about academics. They just told me about their style of play, how they like to get up and down, run screens, stuff like that. They were pretty great — all three schools that I’ve been to so far.”

Do you watch Michigan’s basketball team much?

“I watched some of them last year. Trey Burke was great, he was a great point guard. Tim Hardaway, Novak and all those guys, Stu Douglass — yeah, I watched them. I was at the game against Illinois last year, actually. So I’ve gotten to see them in action.”

Coming away from the visit, what do you like about Michigan?