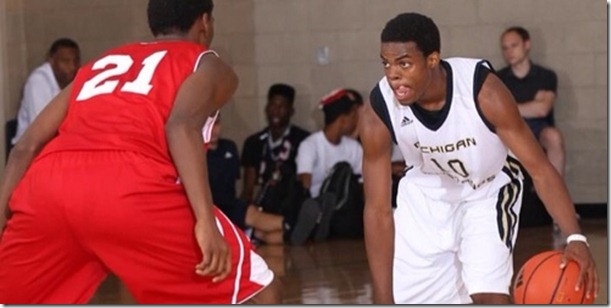 Point guard generally is considered the most important position on the basketball court. It’s also one of the more difficult positions to evaluate. Athletic wings that can attack the basket, tall shot blockers or dead eye shooters are easy to recognize while a true point guard needs to combine quickness, scoring ability, vision, leadership and an innate understanding of the game into a complete package. Since his commitment to Michigan last July, Derrick Walton has proven that he’s ready to be Michigan’s next complete point guard.

After the jump we breakdown Walton’s summer including what he proved, what questions he has to answer, a summer highlight compilation and the top moments of his summer.

Walton proved a lot on the court this summer. With his college decision behind him, the 6-foot guard got the chance to focus 100 percent on improving his game. On the AAU circuit this summer, Walton was consistently the best player on the floor, proving he can play at a high level among some of the best players in the country. He was constantly matched up against some of the best talent the circuit had to offer and more often than not, outperformed his opposition.

Walton sets himself apart with his passing ability and defensive tenacity. He’s a pure pass-first point guard who consistently racks up double-digit assists, and makes his teammates better every game. On the other end of the floor, Walton is a bulldog. He plays suffocating on-ball defense, and doesn’t allow the opposing offense to get into a rhythm. Walton is sneaky off the ball, routinely getting into passing lanes, creating turnovers and turning defense into fast break offense.

The biggest thing Walton still needs to work on is consistent 3-point shooting. There are times when he can fill up the stat sheet in a hurry but there are others when he can just never seem to find a groove. As things stand today he’s most effective scoring by driving the ball to the bucket and getting to the free throw line. Given his size, his effectiveness at the college level will depend on his ability to consistently knock down open threes. There’s no doubt that Walton is a better shooter than he was a season ago, the only question is how much more improvement can we see in the next 12 months?

Walton had several signature moments this summer including a buzzer-beating 3-pointer in a knock out game at the Spiece Run ‘n Slam, an event his Mustang team eventually won. But his best overall performance came at the end of July at the Adidas Super 64 in Las Vegas where Walton earned tournament and championship game MVP honors.

Walton scored 16 points and added 13 assists and seven rebounds in the 17U final, leading the Michigan Mustangs to an 84-71 victory over New Heights (New York) for the tournament title. The win marked the first Las Vegas championship for the Mustangs in over a decade and was a marquee feather in the cap from a strong AAU season. Walton led the Mustangs to a 9-0 tournament record, as they outscored opponents by 17 points per game in super pool play. He went head-to-head against top point guard Kasey Hill in the quarterfinals, easily defeating powerhouse Florida Elite, and scored 20 points in his team’s semifinal victory.

During his MVP performance at the Adidas Super 64, Walton earned high praise from ESPN.com’s Dave Telep. Telep went as far as tweeting that Walton will be at least a candidate for McDonald’s All-American consideration this spring and went further in his blog, raving about his performance:

Derrick Walton (Detroit/Chandler Park) was the MVP of the adidas Super 64. He earned it. Walton and his crew went right at Kasey Hill (Orlando, Fla./Montverde), and once that hurdle was cleared Walton could see the finish line. The truth of the matter is after Andrew Harrison and Hill, the third-best PG is debatable and Walton is in the conversation. Walton’s vision, tenacity and drive make him the third standout point guard in a row for John Beilein’s Michigan Wolverines.

Michigan fans have been spoiled by strong point guard play with Darius Morris and Trey Burke’s monster seasons and Walton looks like he’s ready to be the next in line. He doesn’t have the size of Morris or the scoring ability and consistent three point shot of Burke but he also has passing ability and quickness that neither player can combine.

Walton is a complete point guard and his game continues to mature. His next test will be making a run at Mr. Basketball honors in the state of Michigan. The competition will be fierce with top ten national player James Young as well as other stars like Walton’s AAU teammate, Monte Morris, on the radar. However, Walton has the talent, ability and opportunity to make a run at the state’s top slot.