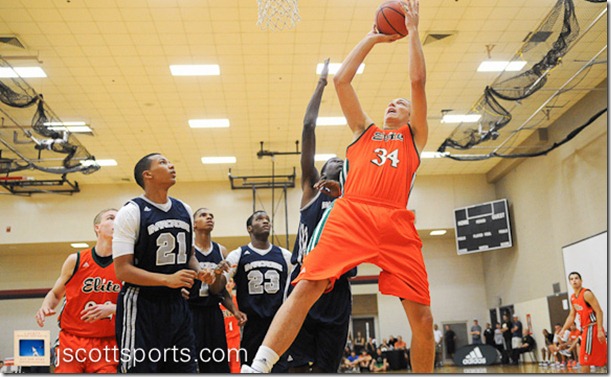 Similar to Michigan’s other 2013 commitments, Mark Donnal wasn’t playing to impress college scouts this summer. Instead, Donnal was focused on improving and diversifying his game against the nation’s best. The 6-foot-9 center quietly improved several aspects of his game, becoming a more consistent player inside and out. He made strides to cement himself as a consensus top-100 player and continued to demonstrate what a great fit he appears to be for Michigan coach John Beilein’s system.

After the jump we breakdown Donnal’s summer including what he proved, what questions he has to answer, a summer highlight compilation and the top moments of his summer.

This summer Donnal proved he can compete with some of the best big men in the country. He was challenged by his Indiana Elite coach, Dan Dakich, to improve his footwork, and develop a mean streak, and for the most part, Donnal did just that. Donnal played in all of the prestigious Adidas AAU tournaments and picked up an invitation to the prestigious NBPA Top 100 Camp in Charlottesville, VA.

Donnal is still growing, gained strength and improved his footwork from a season ago. Some weekends he was dominant on the low block, other weekends he showed off his smooth stroke from behind the three point line. He has all of the tools to be a complete inside-out big man at the Big Ten level.

Donnal’s ranking settled in the bottom quarter of various national top 100 polls and that seems fair. He projects as a solid four year player at the next level but might lack some of the game changing athleticism seen in top 40 or top 50 big men.

At 6-foot-9 and more than 240 pounds, Donnal should touch the ball every time down the floor. He showed a tendency this summer to either get lost in the paint or just fail to demand an entry pass from his teammates. Donnal has a high motor but he needs to get the ball on the block or he’ll be wasting his size, strength and ability. The Michigan bound big man should have ample opportunity to demonstrate his improvement back on the prep level as we saw with his 36 point performance last winter (video).

Offensive assertiveness will come with maturity but Donnal also has room to improve on the defensive side of the ball. More blocked shots, more consistent rebounding and controlling the paint defensively.

Donnal’s best performance this summer that UM Hoops watched in person was at Michigan’s Team Camp in late June. Donnal, playing with his Anthony Wayne (Ohio) high school team, turned in a nearly perfect game against 2014 guard Marqywewll Jackson and East English Village. Donnal led Anthony Wayne to a 12-0 lead to open the game, an eventual 21-point first half lead, and didn’t miss a shot until midway through the second half. After scoring 17 points in the first half, he finished the game with 29 points, going 11-for-12 from the floor. He filled up the stat sheet with seven rebounds and three assists in a convincing double-digit victory while playing at his future home in front of Michigan coaches.

OhioPreps.com broke down the class of 2013 big men in the state of Ohio this April. Here’s Corey Albertson’s report on Donnal:

Last year was when Donnal blew up as a high major prospect and shortly after his sophomore year he gave his verbal pledge to Michigan. Most scouts are in agreement that Donnal’s skill-set as a pick and pop shooter that can also score in the post or pass the basketball makes him a perfect fit for Michigan, now it’s just a matter of seeing how much improvement he can show coaches. The one knock on Donnal has been the lack of elite athleticism but we think that he has more bounce around the rim then he gets credit for, while also displaying the toughness to aggressively mix it up inside. Another summer with Indiana Elite playing for former Indiana assistant Dan Dakich should only help the development of this Toledo native.

One of the greatest risks with taking early commitments, such as the four 2013s that Michigan grabbed in 2011, is progress and development stagnating with a commitment in the past. That wasn’t the case with Donnal. Donnal didn’t make any dramatic jumps in his final season of AAU but he continued to build on his talents and progress toward that player that people projected when he emerged in 2011. His final year of high school will provide the opportunity to add strength and become a dominant force in a talented Toledo public school league before he travels to Ann Arbor a year from now.