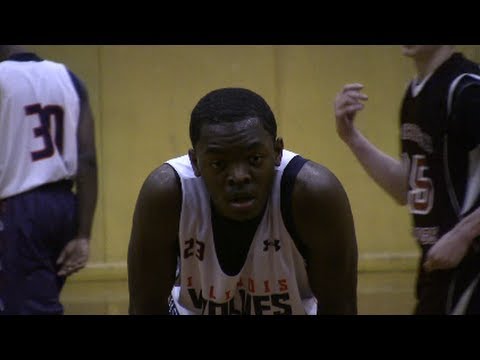 Jordan Ash came into this summer with high expectations and lived up to his billing. The 2015 guard is regarded as one of the top 2015 prospects in Chicago and impressed while often playing up with the prestigious Illinois Wolves program. Ash already holds offers from Purdue, Northwestern and DePaul along with interest from Illinois, Indiana, Wisconsin, Arizona, Xavier, Michigan and Marquette. Michigan has recently gotten involved and Ash is planning a trip to ann Arbor in September. UMHoops caught up with Ash to discuss his game, recruitment and upcoming plans.

Can you describe your game for someone who’s never seen you play?
It was kind of weird, actually, because last year I was listed as a point guard, and this year I was listed as more of a combo guard. But as I was reading more about the positions and stuff I found out I’m more of a lead guard, with my athleticism and my shooting, my improving handle and defense, and my leadership skills. I think those are the biggest assets to my game, the ones I listed.

But during AAU season, you were running two guard?
Yeah, I was playing more on the wing than up top.

This winter, which position do you think you’ll be playing?
I think during the school season I’ll be switching off one and two because I also have Grant Watson there who’ll be playing varsity, and he’s more of a pure point guard. He’s the prime one and when he’s in that’s what he’ll do. Any other time, I’ll be the point. I’m blessed enough that I’ll be able to play both, so it’s not problem for me.

How did AAU go this summer?
I think it went great. It was a great improvement from last year — not only my game individually, but for the program, each team. I played at every age level this year, and I learned a lot more than I would playing one as far as the mental part of the game and different roles and things like that.

Were there any particular skills you were working on this summer?
I was working heavily on my right hand and on my shooting because I wanted to have more range on my shot. I had a decent midrange shot but I wanted it to be consistent from three as well.

Who’s been recruiting you?
DePaul, Northwestern, and Purdue all offered over this past year. And then obviously Michigan, Indiana, Illinois, Xavier, Iowa, Wisconsin, Arizona, and Marquette are the ones that came with them.

What are you looking for in a school?
Any school that’s really out there recruiting, they’re going to be pretty solid as far as basketball goes. So, I’m really more looking at the academic side of things and the community around the school because obviously I’ll have to be there all the time. So, it has to be somewhere where I can see myself going as a student-athlete, and not just as an athlete.

How often do you guys talk?
I talk to him maybe once a month. It hasn’t been too much, but he’s the call I get if I get a call from Michigan.

What do you talk about?
Most of the time we’re talking about a tournament I played in that he watched me for, or something coming up, and just building the relationship that he wants us to have, just like any school would want to have with someone they’re recruiting. He’s a cool guy, so sometimes we talk about anything that really pops up, about high school, [there’s] all kinds of stuff we talk about.

Have you talked to any of the other coaches?
I haven’t really had the chance to meet everyone, but I know he’s a reflection of the rest of their coaching staff, so I’m sure they’re all great guys just like he is.

Were they a presence at your AAU games?
I saw them at pretty much every tournament this summer. It started in Riverside during the first one, and I saw coach Jordan there. I saw a few Michigan coaches in Milwaukee and they were at Fort Wayne, where we had the last one.

Why do you like Michigan?
I’m a big fan of college basketball, so I watched a few Michigan games and I liked the way they used their guards in their system. It’s a great atmosphere, as far as fans go. The guys, they’re coached well. I can tell they’re pushed really hard and that’s something I like in a coach.

When are you visiting Michigan?
September 15th. That’s what we agreed on, but it’s subject to change. That’s what we’ve agreed on so far. I’m going to get there early and check out the campus, and then the football is in the evening. I think I’ll be down there all day if I go.

Any other visits planned?
I have the Purdue camp next week. Other than that just just Michigan.