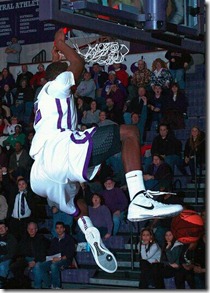 A label that gets tossed around a lot when discussing basketball prospects is “tweener.” Usually, that label is disparaging, describing a player whose size and skill set don’t fit in to a specific position. However, Jae’Sean Tate has spent this past summer proving to scouts and coaches across the country that being a “tweener” doesn’t have to be a bad thing. The 6-foot-5 forward has shown off a very impressive all-around game — but it’s the way he plays, rather than his skills, that have set him apart.

After the jump we breakdown Tate’s summer including what he proved, what questions he has to answer, a summer highlight compilation and the top moments of his summer.

Jae’Sean Tate proved plenty during the AAU season. He proved he can shoot a good midrange jumpshot; he proved he can carry his team offensively even when the opposing team is keying on him. Most importantly, he proved that his skills will translate readily to the college level. The Pickerington, Ohio, native cleans the glass on the offensive and defensive sides of the ball. He is tenacious in the post when it comes to establishing position and finishing at the rim. His athleticism is above-average and he also has the ability to move the ball outside and shoot from midrange.

But what sets Tate apart is his approach to every game. He never takes a play off and his enthusiasm and relentless hustle are always apparent in how he comports himself on the court. Coaches love not just what he can do skill-wise, but how he applies himself on every play with Novakian concentration and effort.

We only filmed Tate in action once this season at the Spiece Run ‘n Slam, in footage you can watch here but perhaps the best highlight video of Tate comes from the Ohio State AAU tournament:

The question facing Tate is a compound question: Will he grow? And if not, will he be able to develop a more perimeter-oriented game? The evidence says Tate will grow as his father Jermaine is 6-foot-10. If Jae’Sean gets to anywhere near that height, there is little doubt he will be an absolute force in the post at the high major level. If he stays around the height he is now, he will have no choice but to apply himself to improving his guard skills over the next two years of his prep career.

Tate has had a consistently impressive summer. Scout.com named him a top performer at both the Nike Peach Jam ($) and Spiece Run ‘n Slam ($) while Rivals noted him as one of the best wings at the Nike Elite 100 camp for underclassmen.  Rivals recruiting analyst Eric Bossi described a very complete all-around performance from Tate as the junior was able to show off not only his ability to score around the rim but also his dribble-drive skills. Tate simply couldn’t be stopped. Tate’s performance in St. Louis combined with earlier in the spring at Spiece went along way toward cementing his status as an elite prospect and assured a number of major coaches were in attendance following All-Ohio Red throughout July. Additional high major offers from Ohio State and Michigan followed by the end of the summer, proof of a successful summer for the Pickerington native.

Scout.com might have the most definitive report on Tate’s play this summer. Brian Snow wrote this after watching Tate in Fort Wayne:

The word that always comes to mind when watching him play is “beast”. Tate put his All-Ohio team on his back and brought them to the championship game. Despite being somewhat of an undersized forward, Tate makes up for it with desire, toughness, and an uncanny ability to rebound and finish in the mid-range. All weekend long he was one of the most productive players at his age group, and the argument could be made he was the single most productive at the event.

Tate’s exploits have been well documented recently and his effort on the court is unmatched. He is a physical presence who rebounds and scores. His elite athleticism combined with his motor make him a weapon that is hard to contain in today’s grassroots scene. He scores most of his points in the paint on post-ups, short jumpers or slashes to the basket. He will need to increase his skill set, especially the consistency of his jump shot, but he will be a priority for most high-major and mid-major-plus programs in the Midwest and beyond next season.

Jae’Sean Tate is a top-notch player and someone any program would love to have. His combination of athleticism, passion for the game, and relentless effort make him an ideal player no matter where he ends up playing on the court. With the strong potential of added height, Tate would be a great addition for the Wolverines.

Right now, there are quite a few schools in the running for the All-Ohio Red star. Xavier has been in it since the beginning, and Iowa was talking to Tate before Michigan. Tate has not explicitly stated that he has any “top schools,” but it appears the two schools commanding most of his attention are the two who offered the latest: Michigan and Ohio State. It’s a genuine toss-up between the Wolverines and the Buckeyes — one is the hometown university, the other is the school that has taken in quite a few of Tate’s high school classmates (Caris LeVert in basketball and Taco Charlton in football) and is the preferred school of Tate’s AAU coach (Benji Burke, father of Michigan point guard Trey Burke).

Wherever Tate winds up, he will be a force. He knows no other way to play than all-out attack mode and with a few more inches and heightened perimeter skills, he could make an immediate impact wherever he winds up.