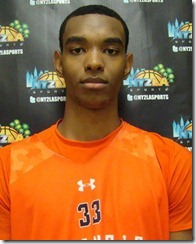 It’s easy to fall into superlatives when describing Keita Bates-Diop. The swingman from Normal, Illinois has been high on Michigan’s list of prospects for a long time, with good reason. Watching him on the court, he’s a player who looks like he ought to dominate every game he plays — he’s a rangy defender, a smooth ballhandler and he has one of the smoothest jumpshots in his class. He towers over most perimeter defenders at 6-foot-7, with an even greater wingspan, and is quick enough to give bigger defenders fits when driving to the basket. Bates-Diop’s recruitment has reached another level after a very successful summer on the AAU circuit and Michigan is very much in the mix after offering a scholarship on June 15th.

After the jump we breakdown Bates-Diop’s summer including what he proved, what questions he has to answer, a summer highlight compilation and the top moments of his summer.

This was a “show-me” summer for Bates-Diop. He always looked like a great talent on the court, but he had to show he could produce on a consistent basis. Bates-Diop proved that when he was aggressive and focused, he could do as much damage as the top prospects in the country. Instead of settling for jumpshots, the swingman used his long frame and quickness to drive to the basket and finish at the rim. He stepped up his commitment to defense with excellent results — Bates-Diop’s long arms and quick hands made him a constant presence in passing lanes. This also allowed him to showcase his prowess in the open court by starting fast-breaks off of steals. With a smooth jumpshot still in his back pocket, the Illinois Wolves star solidified himself as a legitimate threat to score from anywhere on the court. He backed up his huge potential with some very impressive performances at high-profile AAU events and his recruitment took off this summer as a result.

Despite his impressive showing this summer, the question about Bates-Diop remains the same as it’s always been: can he stay aggressive and be a consistent producer, or will he let his sometimes lack of aggressiveness derail his game? That’s not to say Bates-Diop is a headcase or anything of the like, he’s just a player that’s still realizing just how good he can be.  The main indicator of his aggressiveness is how often he’s taking the ball to the rim. Though he has made strides in this area, he still needs to improve his finishing ability in the post. Bates-Diop will at times settle for contested jumpshots rather than aggressively taking the ball to the rim and finishing strong. Given how he’s already improved this summer by leaps and bounds this summer, it’s safe to say he’ll be working on these skills and an aggressive mindset this winter during high school basketball.

We compiled the following highlights with footage from the Spiece Run ‘n Slam, Merrillville Spring Classic and GRBA National Championships.

Bates-Diop was impressive at most AAU events he participated in this summer but many times what was more impressive was his potential rather than his performance. Not so at the Spiece Run ‘n Slam in May. This event really kicked off Bates-Diop’s status as a high-profile recruit and word of his strong showing drew crowds to his July AAU games. The swingman scored 20+ points in multiple games and was a consistent, aggressive force on the offensive end. What he especially showed was his versatility—Bates-Diop was scoring with his jumpshot as well as driving to the hoop, and he also threw in some back-to-the-basket play. Spiece was an early showcase for Bates-Diop and he made the most of it, which led to increased interest from many schools who might have been on the fence about the 2014 prospect.

Rivals.com national recruiting analyst Eric Bossi was on hand at the Run ‘n Slam and evaluated Bates-Diop’s game. Here’s what he had to say:

“A silky smooth forward who can play some in the high post, Bates-Diop’s future is on the wing and he wields one of the smoothest, most accurate jump shots in the sophomore class. More than just a shooter, the 6-foot-7 forward has length, ball skills and is a graceful athlete who is light on his feet and plays with a high level of intelligence.”

Keita Bates-Diop is one of the most talented players on Michigan’s target list – a consensus top-45 prospect – and his potential is through the roof. His prodigious length and height, combined with his substantial athleticism, make him an ideal matchup nightmare in any offense. His perimeter defense is quite good, and once he adds some bulk his post defense will consist mainly of being a high-flying shot-blocker.

This summer Bates-Diop delivered on that potential in a big way, legitimizing his status as a high-profile prospect. While he lived up to much of the expectations surrounding him, he still has some work to do. He needs to work on being the consistent offensive force he can be, as well as diversifying his game and venturing more into the post, where matchups will almost always be favorable. None of this takes away from the guy’s talent, however, It is likely that Bates-Diop will grow into his talent even more as his game continues to progress, which makes it even more exciting to keep an eye on as his recruitment.

Right now, it appears Michigan is in decent position. Though a number of Big Ten schools have offered him – his high major offer list includes DePaul, Illinois, Kansas State, Marquette, Michigan, Northwestern, Ohio State, Oklahoma State, Purdue and Wisconsin – a couple schools have carved out strong position in Bates-Diop’s recruitment. Purdue and Michigan along with home-state Illinois have all made strong early impacts for a player and have hosted him on unofficial visits this summer. One wrinkle in Bates-Diop’s recruitment is that he’s not only concerned with basketball but is prioritizing a strong engineering program in his college decision.