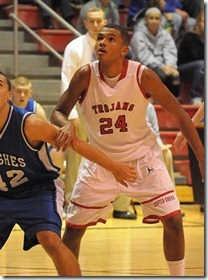 Michael Benkert is a 2015 wing prospect from Greenwood, Indiana. He played with the Eric Gordon All-Stars program this summer and also attended Michigan College Practice Camp in June. The junior is very talented and displayed an array of skills throughout the summer, and he is now attracting interest from some major programs. UMHoops talked to him about his summer, how his recruitment is going, and more.

Could you describe your game?

“I’m very versatile. I can dribble, shoot, pass. I mean, it’s pretty hard for someone to guard me because all throughout elementary school and middle school I was mostly a post player. So if I get a mismatch I can either take him off the dribble or go down into the post.”

How did AAU season go this summer?
“I think it went very well. Being on EG10 for the first time with this whole different group of kids, I think we just played really well together and bonded.”

What were you working on improving about your game this summer?
“I would say mostly my dribbling. I felt like if I could just be an amazing dribbler and beat people off the dribble using my first step, I think once I master that, my game will improve so much.”

What schools have you been hearing from?
“Purdue, Michigan, Indiana, Notre Dame and then Evansville. Those are probably the most major ones that have been looking at me.”

Do you have any early offers?
“No, I haven’t gotten any offers yet.”

What are you looking for in a school?
“For school, I’d like it to be close to home so I could see my family and stuff. Just like, have a good program and make sure I like the coaches and everything.”

How often do you speak with the Michigan coaches?
“I haven’t lately. They’ve been keeping in touch with my dad, actually. I actually haven’t got to talk with them since the Michigan camp.”

Which coach has been keeping in touch with your dad?
“Jeff Meyer.”

What were the coaches talking to you about at camp?
“They were just talking to me about how they really like the way I play, and that they definitely wanted me to get back up there sometime.”

What’s your impression of the coaching staff?
“I really like how they coach. At the camp we did drills and stuff, and just how they taught them and what they did really impressed me.”

Word is you’ll be making a trip to Michigan soon.
“Yep. September 8th I’m supposed to go up there for a visit and for a football game.”

Were the Michigan coaches at your events this summer?
“Yes they were. Mostly it was Jeff — I saw him a couple times. And coach Jordan. I saw him at a couple of our tournaments.”

What do you like about Michigan?
“I like how they’re a championship team. Last year they won the Big Ten, and I like a team that wins.”

Do you have any other visits planned right now?
“Nope. The only other visit I made was to Purdue, and that was during the summer in June.”

What did you think of that visit?
“I liked it. I like those coaches also. Just seeing everything, seeing the program, the locker rooms and everything. I thought it was neat.”