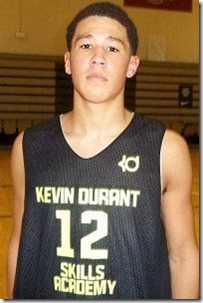 Devin Booker was on everybody’s list to watch this spring and summer. The Michigan native exploded on the Mississippi prep circuit and the word was out across the nation. Everyone wanted to see what the hype was about. It was up to Booker, who hadn’t been seen by most prominent national scouts, to prove his mettle on the big stage. The 6-foot-5 guard had every opportunity, playing with the Alabama Challenge on the prestigious Nike EYBL circuit, and certainly made the most of it.

After the jump we breakdown Booker’s summer including what he proved, what questions he has to answer, a summer highlight compilation and the top moments of his summer.

Booker proved that he’s a game changing off guard at the next level. His game revolves around his shooting stroke but his skillset is surprisingly diverse. He ran the point guard with the Grand Rapids Storm in Indianapolis and showed more than enough ability to put the ball on the hole and get to the bucket. He has a great feel for the game and that allows him to make the most of his ability by getting his shot off anywhere on the floor. He plays well without the basketball, demonstrating the sort of basketball IQ that you would expect from the son of a former college All-American.

Ranked in the top 30 by all three major services, Booker proved that he is very much among the best players in the class of 2014.

Booker wore down a bit at the end of the summer and eventually hit a bit of a rough patch. Of course that came after playing the EYBL circuit, three highly regarded Nike camps and even an extra tournament with the Grand Rapids Storm. Booker’s summer included stints at home in Mississippi and his former home in Grand Rapids as well as tournaments and events in Virginia, Minnesota, Texas, California, Nevada, Missouri, Indiana, Illinois and Florida. As his shot wore down a bit, the area where he could make the most improvement became clear: sheer athleticism. Booker has the handles and feel for the game to get to the basket but he’s not quite the elite athlete that you envision when discussing a five star recruit. Booker still has two years of high school ball remaining and should have plenty of time to work on developing his strength and athleticism before playing at the next level.

We only caught Booker in person at one tournament while he was playing with the Grand Rapids Storm at the Adidas Invitational in Indianapolis. Here are some of his highlights from that event:

There were many highlights of Booker’s summer, including strong showings at the Nike Skills Academies and Elite 100 camp, but perhaps the most important moments were the early spring events when everyone was focused on Booker’s game to see if he lived up to the hype. Booker made his presence felt early in the summer with a strong showing at the first EYBL event of the season in Minnesota. Booker averaged 16 points per game while connecting on 64% of his three point attempts at that first EYBL event and caught the eye of everyone in attendance. Michigan coaches John Beilein and Bacari Alexander tracked Booker throughout the weekend – Michigan coaches were actually in attendance at every one of Booker’s summer AAU games – and by the end of the weekend it was clear that Booker was on his way toward emerging as one of the country’s best guard prospects.

ESPN’s Dave Telep absolutely raved about Booker after watching him at Nike’s Elite 100 Camp for underclassmen.

However, the player who made the biggest impression may have been Devin Booker (Moss Point, Miss./Moss Point). Halfway through the camp, his team was revving at a high level and winning. Booker was so strong that he even took his team to the championship game of the three-on-three series. This kid is a model high-major player. The genes (dad was Big Eight POY at Missouri) are there and his mental makeup is awesome. There are no highs in his game and consequently zero lows. He became a top-25 player on the EYBL circuit and then solidified the ranking here.

Coaches talked, camp directors chimed in and players handed out respect. By the time this camp ended, the respect for Booker was nearly unanimous. I’ve seen him a lot since April and have always been taken by his aptitude for making the correct play and sticking jumpers. This kid’s best attributes are his brain and his stroke and that played out on a big stage at the Elite 100. There were better athletes, maybe even better prospects but there was not a more complete wing player than Booker.

Booker exploded from mystery recruit to five star prospect over the summer but he’s consistently praised Michigan as one of the first schools showing him recruiting interest. The Wolverines have made a strong effort and have put their best foot forward, starting to prioritize the Grand Rapids native early last summer after a big performance at Michigan’s College Practice Camp. Booker has visited Michigan for football and basketball games, camps, campus tours and open gyms over the last two years. Michigan has made an impact and sits near the top of Booker’s list.

However, there are others at play. Booker’s father, Melvin, was an All-American at Missouri and the Tigers are very much involved in the younger Booker’s recruitment. Booker is scheduled to visit Missouri for a football game this fall (Sept. 8) as well as (new) home state Mississippi State (Sept. 1). Booker also took a late summer visit to Michigan State. At one time Booker looked likely to make an early decision but he’s seemed to pull things back a bit as his stock has risen. Michigan will be in the mix until the end, but at this point it’s not clear when he’ll look to make his college decision.