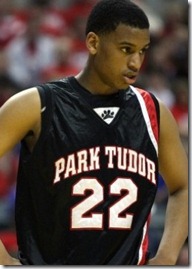 Trevon Bluiett may not be the most athletic player in the 2014 class. He doesn’t have the most college-ready body and he doesn’t have explosive quickness or leaping ability. But Bluiett is one of the most sought-after players in the country, with a drawer full of high major offers, because he can flat-out play. The 6-foot-5 swingman is always in the correct spot on the floor on offense and he rarely gets caught out of position on defense. He is an aggressive scorer and can fill it up in a variety of ways. He has improved vastly when it comes to rebounding and has developed an impressive nose for the ball. But where it’s likely Bluiett will find his niche in the college game is as a knockdown shooter. Bluiett is one of the best pure shooters in the 2014 class and is likely to graduate as one of the best  all-around scorers when all is said and done.

After the jump we breakdown Bluiett’s summer including what he proved, what questions he has to answer, a summer highlight compilation and the top moments of his summer.

Bluiett has always had a great jumpshot with great range. What the Park Tudor standout proved this summer is that he is a lethal scorer from anywhere on the court and that he has developed a more versatile game than he often gets credit for. All summer long Bluiett worked hard on his defense, stamina and rebounding — and it showed. Watching Bluiett at the Run ‘n Slam in May and then at the end of the summer at the GRBA Nationals, it was obvious Bluiett had been focused on adding versatility to his game. He was intent on working within the offense, being a facilitator and cleaning the glass. He really showed off his ability to be a complete team player and his effectiveness scoring from wherever his coach needed him to be — on the wing or in the post. While his strength has always been, and will continued to be, shooting, Bluiett showed that he has much more to offer than a pretty shot.

Bluiett spent much of this past summer answering questions, and the ones that remain seem a bit nit-picky and inconsequential. However, they are relevant. Most questions about Bluiett revolve around his lack of athleticism and his sometimes-flagging stamina. Bluiett doesn’t score by blowing by his defenders or leaping over them. The question is whether or not Bluiett’s lack of big-time athleticism will negatively affect him in college. However, given that he has played on the high-profile Spiece Indy Heat team this summer against some of the best college-bound competition in the country, and thrived doing so, it is hard to see this turning into an issue when he gets to school, wherever he goes. The one other big question is regarding his defense at the high major level. Bluiett wasn’t called upon to man up against really quick guards much in AAU and it remains to be seen what position(s) he’ll be able to defend at the college level.

This may be cheating, but Trevon Bluiett’s signature “moment” this summer was really the entire Nike EYBL circuit leading up to the Nike Peach Jam. He was, in a word, unstoppable. The rising junior averaged 16.5 points per game and shot an impressive 48 percent from the field. He was one of the most productive players on a circuit that included many of the most talented players in the country. Bluiett proved he certainly belongs in the conversation of the best wing scorers in his class. Although Bluiett and his Spiece team hit a bit of a skid at the final EYBL event at Peach Jam, there were very few players more impressive in a more demanding league than Bluiett on the EYBL circuit this summer.

Our summer highlights include footage of Bluiett at a number of events including the Nike Peach Jam, Spiece Run ‘n Slam, Adidas Invitational, GRBA Nationals and more.

Bluiett’s third-party report is brought to you by Rivals.com, and Triple Double Prospects, recruiting analyst Corey Albertson, who watched Bluiett dominate play during the second day of the Adidas Invitational:

Bluiett is known as an explosive wing scorer. On Thursday, the four-star poured in 32 points for Spiece team, including a barrage of long-distance jumpers. With great size for his position, and an improving ability to make plays off the dribble, Bluiett is one of the top perimeter scorers in his 2014 class. What we like about him is his pace. He doesn’t force the issue and he usually is very good at waiting for offensive opportunities to come to him instead of pushing too hard for shots. His athleticism is still developing, but Bluiett has become a nice all-around player who can do more than score.

Trevon Bluiett is a pure scorer with an emphasis on shooting. He possesses one of the silkiest jumpers in the country and knocks down shots from range on a consistent basis. He can create his own shot but he can be a catch-and-shoot assassin. However, Bluiett spent much of this summer proving he has ability to score in other ways besides shooting. He has vastly improved his driving ability, as well as his post-up game — Bluiett is tall enough to be able to score in the post against smaller perimeter defenders. Bluiett has also greatly improved his rebounding, and seems to always be in good position for scoring opportunities when cleaning the offensive glass. He has a remarkable tendency to let scoring opportunities come to him, rather than forcing them. He simply brings a lot to the table without taking much off of it.

Michigan offered Bluiett shortly after the June 15th offer day, as soon as Bluiett was able to make it to campus for a visit (Beilein doesn’t offer players before a full fledged visit). It was obvious Blueitt was impressed by his visit to Ann Arbor and the fact that the coaching staff made a point of offering him in person. Bluiett has a ton of offers to sort through, and he isn’t putting a timetable on his decision. The general feeling is that he is partial to Indiana and he’s mentioned taking three of his officials to the homestate schools: Indiana, Butler and Purdue. However, Michigan is firmly in the mix and Bluiett seems to be a perfect fit for Beilein’s offense.

Bluiett is in no hurry to make a college decision but wherever he ends up, he’ll be a difference maker scoring the basketball at the next level.