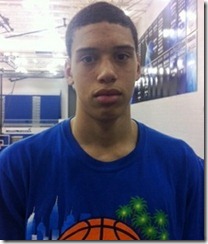 There aren’t many players in the class of 2015 with more potential than Trevor Manuel. The versatile 6-foot-8 forward can play almost anywhere on the floor and his future is impossible to ignore.

The Lansing Sexton forward played up on the 16U Meanstreets squad this summer and stood out on a team featuring several top prospects. He moves well for a kid his size and has great hands in the post. He isn’t yet a particularly strong finisher, but his length gives him the ability to make the occasional spectacular play at the rim. Though he has the height of a future post player, Manuel prides himself on his versatility and worked hard all summer to develop an all-around game.

“I try to be an all-around-type player, really,” Manuel said. “I can shoot, rebound, dribble, really be a player that can play anywhere.”

Manuel showed off his skills at some high-profile events throughout the summer. The Lansing native played at Nike’s Elite 100 camp, the Elite 64 tournament in Las Vegas, as well as the Peach Jam in August. Manuel said he thought he played “pretty good” at those three major events.

He played well enough to attract some serious high-major attention. Manuel already has offer from the hometown Michigan State Spartans and is receiving interest from most of the Big Ten as well as Providence and North Carolina State. This is likely more because of his frame and coordination than actual on-court production, but Manuel has plenty of time to develop a scary-good game.

Manuel said playing up for his Menastreets AAU team, which includes former Michigan target and Michigan State commit Drake Harris, taught him a lot this summer.

“I learned from most of them. Like Drake Harris, he’s a versatile point guard and he was highly recruited. I learned from him a lot,” Manuel said. “And Ty Wilburn, our really good point guard actually helped me with my post skills. And we had really big men, too.”

So how involved is Michigan? It appears they are lining up for Manuel’s attention along with the rest of the Big Ten. It stands to reason that Michigan State, the hometown school and the early offer, has a slight lead on the rest, but it appears the playing field is level for all the schools at this early stage.

Manuel said he has been speaking with Michigan assistant coach Lavall Jordan”about once a month.” He said their conversations usually revolve around academics, an important topic for Manuel.

“My mom and dad always stress about my grades,” Manuel said. “Because if something were to happen that wouldn’t allow me to have a really good, successful basketball career, I can always go back to college to get my stuff together and start my own business or do something like that.”

Michigan made the trip to watch Manuel at the Peach Jam, and he also mentioned coach Jordan was at some of his other events, as well.

Manuel will be taking a visit to Michigan for a football game in September, but a concrete date has not yet been set.

For now, Manuel will be preparing for his sophomore year of high school at Lansing Sexton, where he will surely be called upon to begin the tall order of fulfilling his enormous potential. Once he starts to really developing his post game to go along with his decent perimeter skills, the lanky forward will have not just the Big Ten but schools from all over the country watching his games next summer.