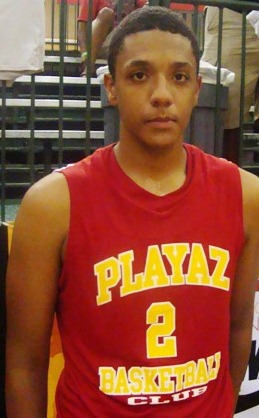 John Beilein and his Michigan staff are expecting a host of high profile recruiting visitors on campus for the first Michigan football home game of the year this weekend.

The Wolverines expect to host a pair of top 20 prospects in the class of 2015 including No. 1 ranked Karl Towns Jr. and No. 11 ranked Hyron Edwards.

Towns’ father, Karl Sr., reported that Towns was planning a trip to Ann Arbor but had yet to finalize the visit.

It’s been a busy couple weeks for Towns who recently added offers from North Carolina State, Florida and Kentucky along with recent visits to Duke and North Carolina. Kentucky head coach John Calipari had the opportunity to coach Towns as he participated with the Dominican Republic National Team this summer. Towns discussed Michigan earlier this May in our 2015 intro feature.

Additional notes on Hyron Edwards, Jae’Sean Tate, Reggie Cameron, Nate Fowler and others on their upcoming trips to Ann Arbor after the jump.

For Edwards, it will be the second trip to Ann Arbor within the last month. Edwards tripped to Ann Arbor in early August and liked what he saw enough to schedule a return trip. Edwards holds offers from Indiana, Purdue and Illinois and will continue to be a priority target for the Wolverines, who don’t offer 2015 prospects until June 15th, 2013.

2014 combo forward Jae’Sean Tate already holds an offer from Michigan and he plans on visiting Ann Arbor for this Saturday’s football game.

“I’m ready to see what Michigan football is all about. I’ve heard stories,” Tate said. “They have a great stadium up there and I’ve heard it’s just crazy on game day.”

Tate visited Ohio State for their football home opener on Saturday and came away impressed.

“I had a great time. That was also my first Ohio State Buckeye game. They showed me a lot of love and I enjoyed it. I’m hoping to go back for a couple more games.”

2013 forward Reggie Cameron is one of the few priority targets left on Michigan’s 2013 recruiting board. Cameron recently cut his list to seven schools and the Wolverines made the cut. Now Cameron has scheduled an official visit to Ann Arbor for September 15th.

Cameron has taken recent trips to UConn, Seton Hall and Georgetown along with a previous visit to North Carolina State. The 6-foot-7 senior reports that he’s also looking to schedule an official visit to Georgetown the week after his Michigan trip.

Towns and Edwards will steal the headlines for the class of 2015 visitors but two other Wolverine targets are expected to make unofficials as well. Nate Fowler, a 6-foot-8, 245-pound center out of Archbishop Moeller High School in Cincinnati, Ohio, headlines the additional list of visitors.

Fowler noted that he’s spoken to Dayton “a lot” as well as Ohio State, Michigan and recently Arizona. He’s planning to visit Michigan (on September 8th), Ohio State and Notre Dame for football games this fall. Fowler was fond of all three institutions.

Fowler’s conversations with the Michigan staff have heated up in recent months. Fowler reports that he talks to Michigan “probably once per month” noting that his dad also talks to the Wolverine staff regularly. Thus far, the 6-foot-8 big man likes what he sees in the Wolverines.

“From what I heard from my basketball coach at Moeller, it’s a lot like Moeller in that they have a family spirit there and I think that sounds good,” he reported. “They have a good tradition, basically. And they’re the same colors as Moeller.”

Visit Coast to Coast Tickets on Facebook for giveaways and discounts on NCAA Final Four tickets and other sports tickets.