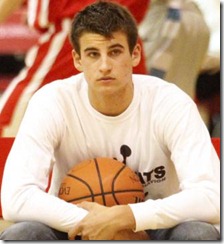 WANE-TV is reporting that Michigan commitment Austin Hatch has been granted an additional year of eligibility by the IHSAA and will reclassify to the class of 2014. Hatch is a survivor of two plane crashes, the most recent in June of 2011 which took the life of his father and step mother and left him in a medically induced coma for a significant amount of time. Here’s an excerpt of WANE-TV’s report:

Hatch informed WANE-TV that the IHSAA has granted him another year of eligibility per a letter written by Canterbury athletic director Ken Harkenrider to IHSAA commissioner Bobby Cox. Hatch was originally scheduled to play his senior season of basketball this fall after missing all of last season recovering. However, the IHSAA’s ruling allows Hatch eligibility for the 2012-13 and 2013-14 seasons. In Austin’s words, it allows him to count 2011-12 as a “redshirt year.” It is an unprecedented ruling in terms of the IHSAA.

Instead of signing with Michigan this November Hatch now has an extra year and will sign with U of M in November of 2013. Hatch says Michigan coach John Beilein and the program has said they will honor his scholarship any year and continue to support Austin.

Our scholarship breakdown chart has been updated to reflect the news of Hatch moving to the class of 2014.