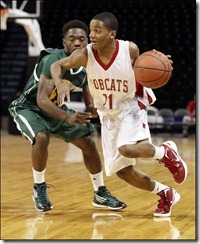 LaMonta Stone is a shifty point guard in the class of 2015. Playing for All-Ohio Red this summer, Stone attracted the interest of high-major schools like Michigan and Michigan State with his quickness, handle and above-average court vision. Stone was at Michigan’s college practice camp in June and was impressive, demonstrating the skill set and feel for the game you would expect from the son of a college assistant coach. We caught up with the Bowling Green High School sophomore recently to talk about his recruitment and upcoming visit to Michigan.

Describe your game and how your AAU season went.

I would say I am best at finding open players and making the right pass without dribbling too much. I’ve gotten better at finding teammates. [AAU season] went well. I learned a lot from the coaches that I didn’t know before about being a point guard. I had a good team. We did well at some big tournaments. It was good.

What were you working on this summer?

I worked on my pull-up, being able to use my right and left hand, learning how to come off a screen correctly and what options I have coming off a screen. I worked on floaters, ballhandling. That’s pretty much it.

Which schools did you hear from this summer?

Michigan, Michigan State, Iowa State, Wisconsin, pretty much all of the local MAC schools and Detroit.

I’m looking for location, I don’t want to go too far. That has a lot to do with it — being close to family.

Which coaches from Michigan have you been talking to?

What do you guys talk about?

He said he liked my game and he wanted me to keep coming back so he could keep an eye on me. He said that I had great court vision when I was at the camp, and I was a true point guard and that they’ll keep looking out for me. Coach Beilein said I had good point guard skills and I need to keep finding the right players with the ball.

How often do you talk with Michigan?

Not too often. Every once in a while but not a lot.

What do you think of the coaching staff?

I like the coaches. I thought that coach Beilein, he seemed like a good coach. It wasn’t an easy practice, so I can see how you can get better with every single practice. It seems like all their players get better throughout the practices.

How do you think the college practice camp went?

I like their campus most of all. I really liked their weight room when they showed us the weight room, I liked that. I also know Trey Burke, so I like that.

Did you notice the coaches at any of your events?

I think Bacari was at one of my Peach Jam games, but that’s about it.

When are you coming to Michigan?

I’m coming September 15th for a football game [against UMass]. So I’ll be up there.