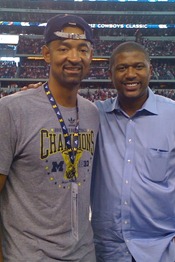 Steve Fisher made an appearance at Jalen Rose’s charity golf outing for the Jalen Rose Leadership Academy and, as seems to be the case at most events involving Jalen Rose, there were plenty of quotes suitable for printing. Here are three highlights from Rose and Fisher:

“I think [Steve Fisher] got screwed,” Rose said. “I don’t think he deserved the way he was ousted. I don’t think it was fair. I think it was an overreaction. And he’s shown that by creating a program that has been, over the last few years, better than the one at Michigan.”

“Now, I go places and more people think of me as the San Diego State coach more than the Michigan coach, for sure west of the Mississippi,” Fisher said.

Rose was at the U-M football game against Alabama. “I support the players and teams,” Rose said. “I love Dave Brandon. I would not be surprised if they found a way to embrace the Fab Five.”

Plenty more from Rose and Fisher at the Detroit Free Press.