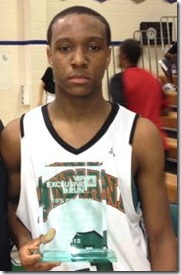 Hyron Edwards, a 2015 point guard out of East Chicago High School in Indiana, is one of the most sought-after recruits in the class of 2015. The five-star guard already holds offers from Indiana, Illinois and Purdue, and Michigan is hot on the dominant point guard’s trail. The Wolverines got their second chance within the last month to impress Edwards as he dropped by Ann Arbor for Michigan’s football home opener against Air Force.

Edwards, along with a group of other notable recruits, joined the Michigan basketball team for a meal before the game. After, he took a quick tour of State Street to feel the atmosphere of Ann Arbor on a football Saturday.

“Coach (Lavall) Jordan took me down to State Street and showed me all the parties that were going on for the football game and stuff,” Edwards said. “I just hung out [with the team and coaches].”

Edwards was also able to catch up with some of his friends, and current Wolverines, from northwestern Indiana, incoming freshmen Glenn Robinson III and Mitch McGary.

“I just hung out with my guy Glenn from The Region and Mitch McGary, so it was fun. It was very fun hanging out with those guys.”

John Beilein and his Michigan staff have made a significant recruiting push in Northwest Indiana, a geographic area affectionately referred to as ‘The Region’ by local residents. Three time captain Zack Novak was from the Region as well as recent recruits Robinson, McGary and Spike Albrecht.

“The visit was great. I loved it all, actually,” Edwards said. “Just the football game, how hype it was, how crazy the student section was. That’s what stood out to me.”

The East Chicago High School standout has seen his stock rise steadily over the summer, and the hype is going strong. Coaches are allowed on the road to watch prospects workout this week and Edwards will be seeing a who’s who of Big Ten coaches rolling through his high school gym to watch him display his skills.

Indiana and Purdue watched Edwards work out on Monday while Michigan State stopped by on Tuesday. Michigan and Illinois are expected to be in the stands to take in his Wednesday work out as well.

While he has already secured a few Big Ten offers, Edwards, like all other 2015 recruits, will have to wait for an offer from Michigan. But it appears the coaching staff has made not just the policy, but the chances of earning an offer, clear to Edwards.

“[Michigan] told me when I first went down there on my first visit that they were going to offer me in June of my junior year,” Edwards said. “That’s what they told me and I think that’s pretty good.”

For Edwards, the visit to Michigan mostly confirmed what he had always perceived about the program. He said Michigan is in good standing among the schools showing him interest.

“Michigan has to be in the top with the rest of the schools that I like because Michigan is a great school and they have a great basketball program,” Edwards said. “And the coaching staff is great, too.”