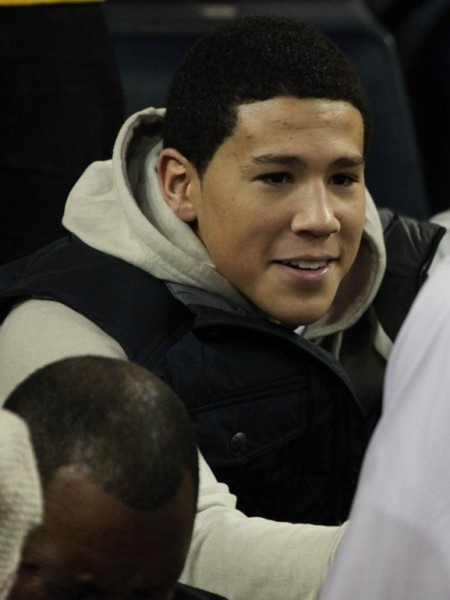 One of Michigan’s highest recruiting priorities, 2014 combo guard Devin Booker, is receiving attention from all over the map. Booker’s recruitment continues to surge with major interest from Alabama, Florida, Louisiana State, Michigan, Michigan State, Mississippi State and Missouri among others.

Michigan continued its full court press for the Grand Rapids native with a visit to Moss Point, Mississippi from John Beilein earlier this week to watch Booker work out. We caught up with Booker for a quick update on his recruitment, how he thought his workout went, what other visits he has scheduled and more.

Yeah he came Monday I think it was.

It went really well. I just worked out with a few of my teammates. My dad put us through a workout. Mississippi State’s head coach was there, also, Coach [Rick] Ray.

Did you get to talk to the coaches?

What did you talk to coach Beilein about?

Really, the same thing we’ve been talking about for the past year now. He was just talking about how I’d fit in the offense and how Michigan loves me and they were the first ones there. He was saying he wanted to get my dad on campus for a game this year.

You visited Mississippi St this fall?

Yeah. I went to Mississippi State for their first football game of the season, I’m not sure of the date.

It went well. I like the campus a lot. Atmosphere was great. Obviously it was the first game of the season, so there was a lot of people there. I played with the team, also. That was fun. I knew a couple of guys on the team because they played on the same AAU team as me.

Are you planning on visiting Michigan during the football season?

As of now, we don’t have anything set up. But I think it will probably happen—I’ll probably get up there and visit both Michigan State and Michigan if I go up there.

Did you get to visit Missouri?

No I haven’t gotten to visit them yet, but we rescheduled it for October 12.

Do you have a timeline for when you’d like to make a decision?

What other visits do you have lined up?

As of now, this year I already went to Alabama and Mississippi State. And Missouri on October 12 and then LSU sometimes in October as well. So, I’m not sure what weekend that will be.