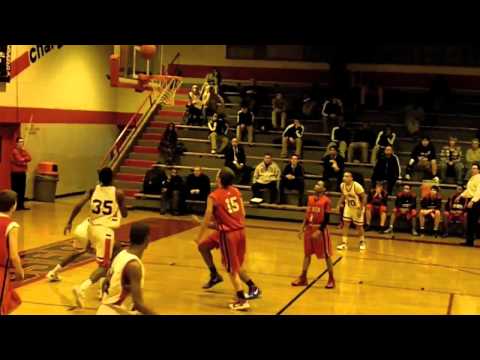 Jordan Ash is one of the most sought-after guard prospects in the class of 2015 and is rated the seventh-best point guard in his class by Scout.com. Michigan had the St. Joseph’s star for an unofficial visit on Saturday for the football game against Massachusetts. We caught up with Ash on Sunday evening to get an update on his recruitment and what he thought of his first visit to Michigan.

So what exactly did you do on the visit?
When we first got there, we met with the coaches and we went through the Player Development Center. We went through the practice facility, coaches’ offices, video room, scouting stuff, all that type of stuff. We talked with Coach Beilein about what he looks for in his players. Then we went down to the weight room and we checked that out. They talked about what they had, how they worked when they’re in there. Then we went to the locker room. We checked out some stuff they have that’s pretty unique, they showed us the iPads and stuff. Then we went through the tunnel, which has a lot of different pieces of history from Michigan basketball. They had some pieces of the floor from when the Fab Five was there. We went out to the court, but we couldn’t go all the way out because it’s under construction. After the tour, we hung out and tailgated a little bit with the players: Glenn [Robinson III], Mitch McGary and all those guys. And then we went to the football game.

Did you enjoy the game?
Oh yeah, most definitely. I’ve never been anywhere near 110,000 people but they have that all the time (laughs). It was just crazy to be around that type of atmosphere. They had 24,000 students in that student section, and that was crazy as well. The team played great and it was great to watch Shoelace as well.

What did you talk to coach Beilein about?
He talked about what he looks for in his players. He really said that he puts academics first. He told me that he wouldn’t offer after this year, my sophomore year, until after June 15th, after he’s seen my grades. Because he wants to make sure I’m either maintaining a high GPA or it’s improving, that’s most important. We talked about that a lot, and then he talked about the brand, what Michigan stands for and everything he said he was pretty straightforward and I could tell he was telling the truth and not just what I wanted to hear.

How did the visit go overall?
I think the visit went fantastic. It was my first time out there, and it was important for me to have a good impression on the coaching staff and vice versa. I think it went well. You know, at first I was only talking to coach (LaVall) Jordan. He used to be the only one I knew. But I met the managers and coach Beilein and the whole coaching staff and they’re all great guys.

Have you taken any other visits this fall?
No, the only one I have set up right now is Purdue’s Midnight Madness on October 12th. Other than that, Michigan’s the only one I’ve taken [this fall].

Do you have any workouts lined up for coaches?
Right now I’m just doing workouts at St. Joe’s during open gym, and those happen every Tuesday and Thursday. Coaches are there sometimes, but as far as workouts that’s the only thing I’m doing.

What coaches have showed up?
There’s usually a pretty decent number. Last Thursday, coach [LaVall] Jordan was at the open gym, as well as Purdue’s Jack Owens, Tavaris Hardy from Northwestern and Paris Parham from Illinois was sitting there. There were some other schools with guys looking at my teammates, but those were the ones I noticed.

Did the Michigan coaches talk about making any more trips to see you play?
They didn’t say anything about the workouts, but coach Beilein did say he wanted to come out and watch one of my season games. He said something like they can only come to seven games, or something. So he said he has to save some for the live period. He’s probably going to try to come out to one of my high school season games.

Why would you go to Michigan?
Well you’re pretty sure to get a good experience academically. They’re always putting academics first, which is the most important thing to me as well as my family. I think that’s great. Athletically, they’re on the rise. They have the players and coaches there to continue to improve, and I think that’s very important when you’re recruiting younger guys. Obviously, they should be watching your team during the season. Them being on the rise is great.