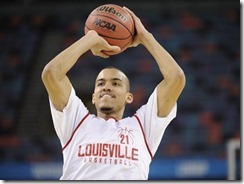 College basketball lives in a one-and-done era where year in and year out All-American and All-Conference teams are littered with freshmen. We can spend time reviewing all of the talented players returning to the Big Ten next season but there’s no doubt that more than a handful of freshmen will be some of the most important players in the 2012-13 season. Here’s a look at ten freshmen, transfers or redshirts that will get their first taste of Big Ten basketball this winter and have the opportunity and talent to make an impact.

The obvious drawback for Tom Izzo on losing Draymond Green is that his versatile senior did just about everything for the Spartans. The hidden benefit is that Green’s graduation leaves a void of opportunity, dying to be filled. Gary Harris is going to have the first crack at filling a majority of that role. There are talented players in East Lansing – Keith Appling in the backcourt, Brandon Dawson on the wing and Adreian Payne and Derrick Nix on the low block – but the Spartans need a true go-to scorer. Harris, a McDonald’s All-American, fits the bill. He is a blue chip athlete with a complete offensive game, he can shoot it, drive it and perhaps even cameo with some on-ball responsibilities  With an RSCI consensus ranking of 16, Harris is the most highly regarded freshman in the league and he should have every opportunity to excel.

At 6-foot-7, Dekker has the skill and athleticism to be a game changer on the wing for Wisconsin. Bo Ryan isn’t known for recruiting many blue chip prospects, or letting freshman get their “boogie on” so to speak, but Dekker could be the exception. Ryan has already publicly praised Dekker’s abilities in comparing him to former Badger standouts like Alando Tucker and Devin Harris. Bo Ryan is not the type to compare a freshman to two of his best players of the last decade before he plays a game. The fact that he’s making those sort of comparisons in the middle of summer should tell you everything you need to know about Dekker.

The crown and jewel of Indiana’s touted recruiting class, Yogi Ferrell should be an instant starter for Tom Crean in Bloomington. The jet quick point guard should have seemingly unlimited talent flanking him with Cody Zeller in the post and Christian Watford, Victor Oladipo and Will Sheehey on the wings. Ferrell is a more than capable distributor but he also has the ability to score the ball himself with a solid mid-range game. You couldn’t ask for much more talent on your side to start your Big Ten career and Ferrell should hit the ground running. Tom Crean wants to play fast, something that you don’t see often in the Big Ten, and Ferrell could be the piece he needs to maximize his uptempo scoring attack.

Michigan hasn’t possessed an athlete like Glenn Robinson III for a long time and he should do wonders to bolstering Michigan’s defense and rebounding presence. The borderline five star recruit has consistently gotten better throughout the two years since he made his commitment to John Beilein and there’s no reason to doubt that improvement – in both skill and athleticism – will continue. Robinson has a frame ready to play in the Big Ten at 6-foot-6 and 210 pounds and his all-around skillset should allow him to easily mesh with Michigan’s returning stars Trey Burke and Tim Hardaway Jr. Robinson has the ability to replace Zack Novak’s production at the four position in John Beilein’s offense or could play the three, allowing Hardaway to shift to the off guard.

Iowa returns just one contributor at 6-foot-8 or taller, sophomore wing Aaron White, and Woodbury will immediately change the dynamic of the Hawkeye front court. Keeping Woodbury in-state is likely Fran McCaffery’s biggest recruiting win since arriving in Iowa City. A consensus top-50 recruit, Woodbury’s 6-foot-11 frame is ready to run the floor in the Big Ten as a freshman. The Hawkeyes, who were second worst in the Big Ten in defensive rebounding and two point defense, will certainly welcome the addition to the front court. The learning curve can be steep for true freshmen big men but Woodbury will be thrown to the fire from day one.

McGary was ranked nearly 20 slots ahead of Adam Woodbury in RSCI’s consensus rankings but Woodbury is ahead on our list. Why? Because McGary will have to play in a crowded front court. He’s talented but two year starter Jordan Morgan is steady and reliable in the post. Jon Horford returns from injury and Glenn Robinson III could even see minutes at the four. Does McGary play more four or five and how quickly does he adapt to John Beilein’s offense? His size and energy mean that he’ll make an impact when he’s on the floor but it remains to be seen just how he fits in Ann Arbor. Wherever he fits, McGary has the size and athleticism that should instantly improve Michigan’s rebounding, welcome news to John Beilein who has boasted one of the league’s worst defensive rebounding teams since arriving in Ann ARbor.

Marshall will be an unfamiliar name to many, but Bo Ryan is going to have to hand his redshirt freshman the keys to the offense this fall. Marshall, like many Ryan recruits, was fairly unheralded out of high school and was rated three stars or less by all major scouting services. History tells us he probably deserves a place on this list, despite many other slots being filled by five stars and McDonald’s All-Americans. Despite losing Taylor, Bo Ryan still has an experienced returning group with seniors  Jared Beggren, Ryan Evans and Mike Bruesewitz along with steady juniors Josh Gasser and Ben Brust. Add in five star freshman Sam Dekker and you have a strong team. Unfortunately, none of them can play point guard. Marshall can. After sitting out last season behind All-American Jordan Taylor, Marshall is likely to step into a starting role at a school that’s made a habit out manufacturing effective college lead guards. Looking for validation of Marshall’s skill? Jordan Taylor says “you won’t even remember I was here by the time George gets done”

The loss of Robbie Hummel will be magnified after his proficient five year career but losing Lewis Jackson will be equally troubling to head coach Matt Painter. Jackson was one of the conference’s best setup men, an experienced leader and the sort of hardnosed player Painter adores. DJ Byrd and Terone Johnson are back on the wings while Anthony Johnson could be poised for a breakout season, but Purdue’s 5-foot-10 freshman Ronnie Johnson could be the solution at the point guard slot. Johnson is a consensus top-100 prospect and the younger brother of current Boilermaker Terone Johnson.

Another name that many won’t be familiar with, and the primary reason this is a list of “newcomers” rather than freshman, DJ Newbill was named a captain at Penn State despite never suiting up in a Nittany Lion jersey. Some might remember Newbill as the former Marquette commitment that was let go to accept Jamil Wilson’s commitment. That controversy left Newbill headed to Southern Miss where the 6-foot-4 guard had a strong freshman year, averaging nine points and six rebounds per game before opting to transfer. The Philadelphia native went back to his home state of Pennsylvania and opted to play for head coach Pat Chambers. Newbill has shed 15 pounds and is ready to join up with Tim Frazier in an improved Nittany Lion backcourt.

Swopshire’s numbers at Louisville were nothing to write home about as the 6-foot-8 forward averaged just three points and three rebounds per game for Rick Pitino last season. Those low numbers were more a product of extenuating circumstances. Swopshire averaged eight points and six rebounds per game as a sophomore before a groin injury eliminated his junior season. Playing time was hard to find in his fourth year as McDonalds’ All-American Chane Benahan arrived and gobbled up front court playing time. Swopshire has immediate eligibility and a second chance to make an instant impact for the Wildcats this season. At 6-foot-8, 210 pounds, Swopshire is the sort of versatile athlete that Northwestern always seems to lack and early returns are positive from Evanston.