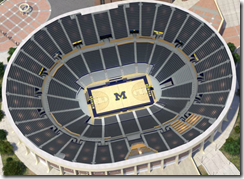 The Michigan basketball staff began this week with a full court recruiting press in the state of Indiana. Michigan had three coaches, including John Beilein, watching workouts in the Hoosier state on Monday afternoon. Per Kyle Neddenriep, all three coaches were on hand to watch 2014 offeree Trevon Bluiett in Indianapolis. Iowa also had two coaches watching Bluiett while Louisville, Illinois, Butler and Cincinnati were also in attendance. Bluiett’s list of suitors is long but the Wolverines continue to make steady progress in his recruitment.

Per GoldandBlack.com, Beilein and an assistant coach also attended 2015 guard Jalen Coleman’s workout on Monday as well. Coleman unofficially visited Michigan State for the Notre Dame game last weekend but is a priority target for the Wolverines.

On Monday evening, the Wolverine staff made another stop, this time to check in on 2013 commitment Zak Irvin for an in-home visit. The early signing period begins on November 14th and the in-home visit period will allow Michigan to check in on its prized group of commitments before that date arrives. It’s safe to say Irvin enjoyed welcoming John Beilein and his staff into his home judging by his tweet after the visit.

Great in-home visit with the Michigan coaches! Can’t wait to be up in Ann Arbor next year!! #goblue

After the jump find the latest on where Michigan targets rank in the first batch of 2013 consensus rankings, season ticket information and other notes.

RSCI Hoops has been releasing consensus rankings for over a decade and released their first set of rankings for the class of 2013 over the weekend.

Michigan’s three 2013 commitments all earned a spot within the consensus top-100. Zak Irvin checked in at No. 29, Derrick Walton at No. 45 and Mark Donnal at No. 97. Irvin and Walton are the top rated prospects committed to Big Ten schools.

Our Big Ten Recruiting Rankings, which incorporate three ranking systems and were updated on August 31st, ranked the top classes in the Big Ten as Michigan, Indiana and Purdue but that was before Kendrick Nunn’s recent commitment to Illini head coach John Groce.

The athletic department has put together a virtual seating chart which provides a three-dimensional view from any seat in the arena and allows you to buy the (available) seat of your choice. More information about ticket sales can be found here. Non-conference single game tickets will go on sale October 11th, ticket packages will be sold October 25th and selected conference game tickets will be sold starting on November 9th.

If you want to research what exactly you are buying, you can review Michigan’s 2012-13 schedule – highlighted by non-conference home games against North Carolina State and Arkansas – here.