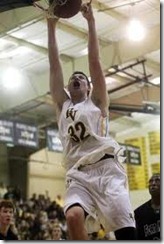 John Beilein has never been one to avoid an under the radar post prospect and he might have found another in the class of 2014.

Michigan’s head coach was in Fort Myers this week watching 2014 big man Ricky Doyle. Doyle turned 16 in May and already measures in at 6-foot-9, 235 pounds, with a reported 7-foot-2 wingspan and size 18 feet. His father, Danny, stands at 6-foot-11 and played briefly for the Detroit Pistons before an 11 year pro career in France.

Doyle didn’t play AAU basketball this summer, opting instead to workout with his high school team and individually. That didn’t prevent college coaches from catching a glimpse of the talented big man, Doyle’s high school team played in two AAU tournaments in July and that was enough for coaches to take notice.

Doyle’s high school coach at Bishop Verot, Matt Herting, wasn’t ashamed to say that he feels “[Doyle] will end up being one of the best post players in the country by his senior year, if he isn’t already”.

Doyle has legitimate size, but most importantly to Herting is his offensive ability.

“He’s a very good back-to-the-basket player. He’s got good hands, he’s very skilled. He’s put in a ton of work and he has a huge upside,” Herting reported. “It’s hard to tell if he’s right-handed or left-handed. Actually, on the block, while he’s a lock with anything, his left hand is probably a little better than his right – and he’s right-handed. He’s very, very skilled with either hand.”

Herting reported that beyond Michigan, Doyle is drawing heavy interest from across the country and while “nearly every school in the country has shown interest”, Ricky and his family are only looking for schools that are a great fit in both style of play and academics. Beyond Michigan, that group includes Boston College, Miami, Purdue, Stanford and Kansas State. It has been previously reported that Doyle holds offers from Boston College, Miami, Penn State and Creighton.

Michigan head man John Beilein and Kansas State head coach Bruce Weber were both in the stands watching his workout on this week. Herting confirmed that Michigan has been steady in its pursuit of the 6-foot-9 big man.

Doyle’s coach also feels that his junior big man would be a great fit for the Wolverine offense.

“We run a full-out motion down here, as well. We run it a little different, in some different spots, up much higher than they do. He understands playing with nine other guys on the court. He’s not a guy who only knows how to get it and go, or get it and score. I think he’d be really good in their offense because he knows how to play — he can make reads, he can pass, he’s aggressive but not selfish. I think in a motion-type situation he’d be really good.”

Despite the heavy recruiting interest, Herting reports that the Doyle family has made the decision not to take unofficial visits. That decision was made to avoid recruiting pressure, save costs and avoid missing time in school. Class of 2014 prospects are allowed to begin taking official visits on January 1st, 2013.

“It’s going to cost them for three days about three grand per trip [for an unofficial visit]. Once you visit one, you’re kind of obligated to visit the others that you’re interested in,” Herting explained. “Ricky’s a great kid and a normal kid. He’s a good student, he’s got a girlfriend, he supports other sports on campus, he wants to go to the homecoming dance.”

Doyle averaged 15 points and nine rebounds as a sophomore, helping the Vikings to a 25-5 record and a trip to the regional finals in Florida. Here’s footage of Doyle in action throughout the last year:

Herting has coached 20 Division I players and is confident that Doyle is going to be a star.

“Everyone looks at the scouting service list, and he didn’t play any AAU because he’s working on his game. He has a chance to be one of the best players in the country, one of the best post players, but he’s not going to do it playing a bunch of pickup games in Las Vegas. It’s going to take work on developing his post game. He is very, very good, and people are just seeing the very beginning of it. We’ve got him on an improvement plan and we sat down with his dad, who played 11 years in Europe, and myself and coach Miller (our post coach) and we have him on a plan for post improvement with weights and plyometrics and he’s progressing through it nicely. After two more years of going through it, he’s going to be really, really good.”

Michigan has yet to offer a true big man in the class of 2014 and Doyle could be an early leading candidate once he visits campus. The Wolverines have also been paying attention to Jabari Craig, a Canadian native playing his prep basketball at New Birth Christian Academy in Georgia.

Joe Stapleton and Dylan Burkhardt contributed to this report. Stay tuned to UM Hoops in the hours and days to come for more on Doyle and Michigan basketball recruiting.