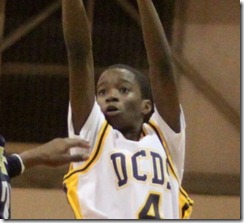 Edmond Sumner is a point guard recruit out of Detroit Country Day whose recruitment is surging after a growth spurt and strong summer on the AAU circuit. The Detroit Country Day standout played for The Family this summer and caught John Beilein’s eye at the GRBA Nationals in late July. Sumner is known for his ability to get to the basket off the dribble but can also fill it up from range. We caught up with Sumner to talk about his recruitment as well as his visit to Michigan last Saturday.

How would you describe your game?
I’m more of a scoring point guard. I’m more of a driver, driving to the hole. Actually I’m pretty strong for my size.

How did the AAU season go for you this summer?
We started off pretty well, but we didn’t end very well at the Peach Jam.

How did it go for you personally?
I think it went great, personally. I met a lot of new coaches.

Were you working on anything specifically about your game this summer?
Really, I was trying to become more of a vocal leader and trying to get my jumpshot back.

You’re trying to get your jumpshot back — did you lose it?
When I started growing, I had a tough time shooting.

Who have you been hearing from this summer?
Wake Forest, Xavier, Iowa, Toledo, Kent State, UMass, Michigan, U of D. I think that’s it.

Any early offers?
Just from Toledo, Kent State, and UMass.

What are you looking for in a school?
A good basketball program, but a good school, as well, education-wise.

Which coaches from Michigan have reached out to you?
Coach Beilein and coach Bacari Alexander.

How often do you talk with those guys?
Well, lately I’ve been talking to coach Bacari a lot.

What do you think of the coaching staff?
I think they’re great. They seem like good coaches who know what they’re doing. They talk with you like they’re not going to sugar-coat anything.

Were they at any of your events this summer?
I only saw them at Spiece (for GRBA Nationals)

What do you like about Michigan?
I would go to Michigan because they have one of the best programs in the state and they’re one of the top educational institutions in the United States. So I’d be getting the best of both worlds if I went there.

You were here for the UMass game on Saturday?
Yes, I was.

What did you do during the visit?
We went to the locker rooms and we got a little sneak peak at the Crisler Center. Basically we were just around that area.

What did you talk to the coaches about?
I met coach Beilein. First he was talking about how he liked how tough I was. But then he was saying basically I could earn a scholarship later in the year, if I was to show that I was trying to get bigger and stronger.

How did the visit go overall?
It went great. I really loved the visit.

What other visits have you taken so far?
I went to Xavier, Toledo, Kent State, Detroit, and that’s it. I’m trying to get down to UMass.

Are you trying to get anywhere else?
Probably Wake Forest.

Do you have any workouts planned that coaches can watch?
We have open gym on Tuesdays and Thursdays.

Have they told you they’ll be around sometime in the future?
Coach Beilein said they’d be there in October or November.