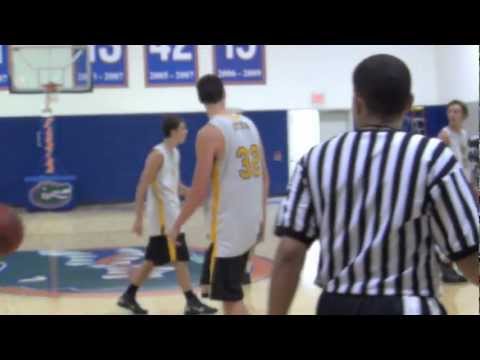 Ricky Doyle is a skilled 6-foot-9 big man from the class of 2014 who has flown under the radar this summer because he didnt play AAU ball, instead focusing on individual workouts with his father and school coaching staff. As we reported yesterday, John Beilein and the rest of the Michigan coaching staff have recently been hot on his trail — Beilein watched the Florida native work out on Wednesday. We got a hold of Doyle to talk about his recruitment, what he thinks of Michigan and more.

What skills were you working on this summer?
I’ve been working a lot with my dad on low post, using both of my hands and a lot of face-up, triple-threat, one-dribble jumpshot. I’ve been learning how to dribble the ball — like, the technical stuff. How to move one way and go the other, you know? The main thing to work on was just getting better and getting more skilled in every aspect around the basket.

Which schools have you been hearing from?
I’ve been in contact with Miami, Boston College, Purdue, Kansas State, Penn State, Washington, Stanford, USC and Michigan.

Any early offers?
The first college to offer me was Boston College – and I have offers from Creighton and from Penn State.

What are you looking for in a school?
Basically how I can fit within the team. A big thing that I came to realize is that the team I’m looking for is a team that wins. A good team that wants to win. Not a team with a bunch of players who are like, “Oh, I want to go score my points.” I want a team that wins, that’s willing to give the extra pass to win a game, or set that pick to get your man open, stuff like that.

Have you been in contact with Michigan recently?
Yes, I have.

Which coaches from Michigan have been in contact with you?
Coach BA [Bacari Alexander], Lavall Jordan and I’ve talked to coach Beilein, too.

Have they talked to you about an offer?
Yesterday, actually, this Wednesday, I talked to Beilein. We had a good conversation about the school and how they’re really interested. He said he won’t offer me a scholarship until I come to campus, basically.

How often do you talk with the coaching staff?
They do talk to my dad a lot, and I talk to them frequently.

What do you think of those guys?
It’s a great staff, a bunch of great coaches, really. Nice people to talk to, just some nice people.

What do you like about Michigan?
Michigan’s a really good school for basketball. A lot of people know that. I have a lot of close family friends who are basically huge Michigan fans, and once they heard Michigan was talking to me they were just going off the walls with excitement. Michigan’s just a great school, period, academically and sports-wise.

Are you planning on making a visit anytime soon?
I have to talk to my dad about that, first. It’s kind of a good amount of money to fly and stuff like that. Really, me and my family would have to go up and visit the school. So I don’t know at this point.