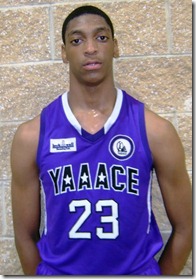 Michigan coaches have been all over the country throughout September attending high school open gyms and individual workouts. Recently it appears that the Michigan staff has also spent some attention north of the border in attempts to build a Michigan pipeline from Canada.

Much has been made of top prospect Andrew Wiggins, a native of Toronto, but Canada’s talent doesn’t end there. Michigan already has one Canuck in sharpshooting guard Nik Stauskas, but it seems the Wolverine coaching staff is looking to add more talent from up north.

Michigan appears to be involved in the recruitment of three Canadian players: 2013 swingman Donnavan Hastings, 2014 big Jabari Craig, and a 2016 do-it-all phenom by the name of Justin Jackson. We caught up with Vidal Massiah, the director of the Canadian AAU program Northern Kings. Massiah spoke with us about all three prospects — Hastings and Craig are both a part of the Northern Kings program. Jackson is not a member of the Kings but Massiah is familiar with his recruitment because Jackson attends Eastern Commerce High School, where Massiah (a former Canadian national team player) played high school basketball and remains connected.

Regarding Hastings, Massiah said Michigan’s interest level has been high.

“I’ve heard from coach Meyer. They’re going to recruit him, they’re going to go up and see him,” Massiah said. “He’s a kid that they definitely want to track and follow this season and see if he’s the kind of kid they want to offer. But he’s definitely on their radar.”

Hastings doesn’t have much high-major interest right now, but he is attending prep school in California in the hopes of raising his profile. Hastings is hearing from St. Bonaventure, New Mexico, Maine, Michigan, San Diego State, Detroit, Canisius, Auburn and others.

Out of the three, it appears Michigan is most involved with Hastings at the moment. The Wolverines are marginally involved with Jabari Craig, but it doesn’t look like he is a priority for the coaching staff as of yet. He is, however, a priority for many other high-major programs, including USC, Purdue, Illinois, Georgia Tech, Georgia, Houston, Nevada and Marquette.

“They (the Michigan coaches) have seen him play this summer,” Massiah said. “I’m pretty sure they’re going to track him at some point and follow him as he develops. He’s got a couple Big Ten schools on him now, so I think that’ll convince them that he’s someone they need to go after.”

Justin Jackson, the young 2016 prospect, sounds like a truly special player. At about 6-foot-7, he is known for his ability as a playmaker and passer — his favorite player is Magic Johnson. According to several scouting services, Jackson has already received offers from many of the top schools in the country, including Baylor, North Carolina and Ohio State. Massiah said Michigan will be in Toronto to watch Jackson next week (September 28th) and that the coaching staff is “building a relationship” with the talented youngster.

Massiah took the time to break down each prospect’s game for us. Here’s what he had to say:

“Donovan’s got a lot of upside. He’s a 6-7 small forward. Really strong legs, really athletic, can shoot it. He has the potential to be a very, very good player. He needs more experience, he needs better coaching, but in terms of what he can do, he’s got the talent and has the ability. He can slash and jump off both legs very well. He can shoot when he’s open, but he has to work on his handle a little more. He’s a very intriguing prospect, and I think that’s the best way to describe where he’s at now with his development. He’s only been with our program for a year. This was his first time on the AAU circuit this year, on that stage. He had his moments where he played very, very well. I think that’s where Michigan caught wind of him, in Indiana playing Team Spiece and one of the kids they were recruiting. He pretty much showed him up. He’s got some talent. I wouldn’t say he’s going to step into a school and dominate. I think he needs to learn, but he’s very capable of learning and in a good system he could be a very effective Big Ten player.”

“Jabari’s probably the most intriguing player in our program, given his size, athleticism and experience, or lack thereof, which is really intriguing for coaches. This is only his third year playing basketball in a structured system. He’s really young – he just turned 17 last month. The upside: room for improvement is huge. He’s a 6-11 athlete. He can run, jump out the gym, has amazing feet and moves his feet very, very well. He switches out on point guards on the pick-and-roll and stays with them for four or five dribbles until he forces them to pass the ball. He’s a shot-blocker, rebounder, and has a developed offensive game. He can shoot it pretty well. He’s got to get better with his back to the basket. Obviously, with his lack of experience that might take some time. He’s got NBA potential, to be honest with you.  He’s being recruited at a pretty high level, he has a lot of schools interested in him. He’s got two more years of school left. With this season and an additional season next year, he’s going to get bigger, stronger, faster and quicker. The more you see him play, the better he looks. He’s only got a handful of real games under his belt. If you’re a coach, you’re looking at a kid who could be extremely special by his junior or senior season.”

“Justin’s actually one of the top prospects in North America for his age. He’s really special. He’s 6-7. He’s kind of in the mold of a Magic Johnson – that’s his favorite player. His biggest strength is his playmaking ability and his passing ability. He played for the Cadet National Team out of Canada this year. They went to Europe. He is just a really special player. He’s got tremendous vision, a great feel for the game, great size, good body. He can pass, make plays, see things. He’s got tremendous handle. For a kid his age, he is way, way ahead of everyone else. He’s receiving a lot of interest. The schools that have contacted me are Illinois and Michigan, those two in particular. I would say he and Jabari are the best two prospects in Canada besides Andrew Wiggins.”