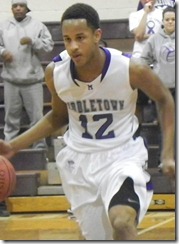 Michigan offered its fifth prospect in the class of 2014 on Friday afternoon as John Beilein offered combo forward Vincent Edwards.

Michigan’s offer won’t be official until he visits Michigan’s campus, which he said will most likely happen on Saturday, Oct 13, the date of the Illinois football game.

The Michigan offer brings Edwards’ current offer list to Xavier, Dayton, Purdue and Michigan. West Virginia has offered, but like Michigan it is expected Edwards will visit in order to make the offer official.

When asked if this offer affects Michigan’s place in his list of schools, Edwards replied, “Most definitely.”

“It’s a great place,” Edwards said. “The facilities are great. The atmosphere is great. Talking to coach Beilein and his staff, it seems like a great place.”