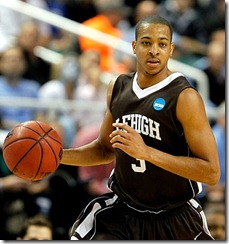 The 2012 NIT Season Tip-Off bracket was finally announced earlier this month. While the featured teams in the event – Michigan, Virginia, Kansas State and Pittsburgh –  don’t quite compare to some of the more prestigious preseason tournaments (this isn’t last year’s Maui field by any measure), the NIT adds intrigue as the only preseason event which still features a true 16 team knock out tournament format. There are no guarantees and all four host schools will be forced to win games on back-to-back days to advance to the tournament semifinals in New York City. There are more than a couple schools in the field which will feel that they have the ability to knock out a major conference opponent and spoil the Thanksgiving party at the Garden.

With the bracket announced, we take a closer look at the tournament including some early storylines, match-ups and unheralded players to familiarize yourself with before November.

Michigan fans are more than familiar with their highly regarded incoming class featuring Glenn Robinson III, Mitch McGary and Nik Stauskas but those aren’t the only fresh faces that will be making their national debut in the NIT Season Tip-Off.

Despite Michigan’s Top 10 class, the Wolverines don’t have the most highly regarded freshmen in the tournament. That honor belongs to Pittsburgh’s Steven Adams. Adams, a 7-foot New Zealand native, is the consensus No. 5 incoming freshman in the country. Adams will be joined by fellow consensus top 100 recruit James Robinson in Pittsburgh while Virginia adds three top-100 players to the fold in Justin Anderson, Evan Nolte and Mike Tobey.

With the NIT Season Tip-Off so early in the season, this will be the first chance for players from this year’s freshman class to make themselves known commodities on the national circuit. Mitch McGary vs. Steven Adams would be certain to open a couple eyeballs in November.

John Gasaway wrote the best post-mortem on Bruce Weber’s career at Illinois but less than two weeks later, Weber had landed on his feet with another major conference gig at Kansas State. With a $3.9 million dollar buy out in hand, there’s weren’t many better landing spots for Weber. Frank Martin left behind a NCAA tournament team that returns its leading scorer and seven of its top eight contributors. Say what you want about Weber’s ability to coach offense, his defensive track record should fit in well with a Kansas State group that ranked as the Big 12’s second best defense a season ago. Weber has a chance to succeed in Manhattan but the NIT Tip Off will serve as his first measuring stick as games against opening games against Washburn, Emporia State and North Dakota are unlikely to move the scales.

There will be some serious mid-major talent featured in the early rounds of the NIT Season Tip-Off including a pair of projected 2013 lottery picks in Tony Mitchell and CJ McCollum.

Given the mid-major talent outlined above, there’s a very real chance that one of the four host schools is eliminated before earning a trip to New York City. Two mid-majors might be most likely to crash the party at the Garden thanks to not only their talent but some potential holes in their opponents.

North Texas not only has future pro Tony Mitchell, they face a Kansas State team still adapting to a new head coach after just a handful of early season games. North Texas returns its entire starting lineup from a season ago.

Lehigh, the highest seeded non-host school, is also a likely Cinderella. The Mountain Hawks return four starters, including CJ McCollum, from a squad that many will remember knocking off Duke in March. Pittsburgh has talent, including a top-10 prospect in Steven Adams, but will have to regain confidence coming off of Jamie Dixon’s worst season at Pitt.

There’s plenty of star players featured in the bracket but these are three individual head to head match-ups that we’d love to see on Thanksgiving weekend.

Game We Want to See:  Pittsburgh vs. Michigan

This match-up would reunited old Big East rivals John Beilein and Jamie Dixon in the familiar setting of Madison Square Garden. Beilein was 3-5 against Dixon when he coached at West Virginia and the contrasting styles could make for quite a game. Dixon’s squads have been renowned for their defense (although last year’s Pitt defense was inexplicably mediocre) and offensive rebounding and should provide a great test for Michigan’s young stars in their first prime time game of the season.

Game to Avoid: Michigan vs. Virginia

This game would be a rematch of last year’s Big Ten-ACC Challenge contest and would provide Michigan with a chance at revenge. However, it would also likely be one of the slowest games you could draw up this early in the season and it would be nice enough to save those grind-it-out 58 possession games for February.