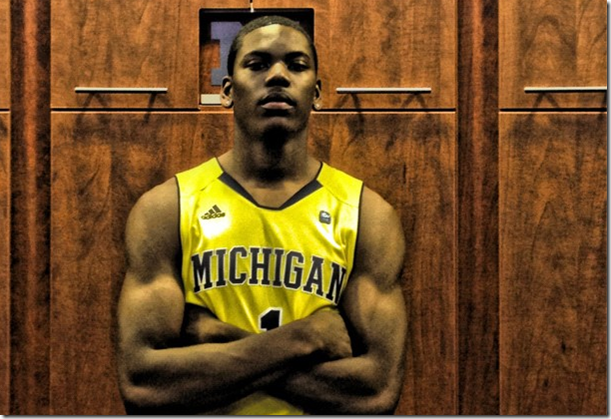 There have been whispers around the internet throughout the summer that Michigan will feature new uniforms for the 2012-13 season. It appears there might be some merit to those rumors.

With a top ten team breaking in a newly renovated arena, it’s no surprise that adidas would like to tinker with the gear for one of its largest schools. The most recent MDen catalog called out the fact that new jerseys are due in September. (HT: MGoBlog forum)

So MDen reiterates that some sort of refresh is coming but it remains unclear exactly what. After some sniffing around and deductive reasoning, we’ve got a sampling of what we might expect for the upcoming season including a mock up of Michigan’s new shorts and photos of other schools that might be wearing the same uniform design as the Wolverines. Pictures after the jump.

Update: Added shots off the rack of the replicas.

These product images from FansEdge.com appear to be the Michigan basketball shorts for 2012-13:

These shorts are listed as the adidas College Point Guard Short for 2012, the same name listedfor Michigan’s 2011 shorts at other outlets.

UPDATE: Here are additional photos of the replicas on the rack via @StevenCullen3

The mesh gradient effect appears to be used by in a number of other new uniforms for Adidas schools, many of which have already leaked photos of their uniforms. Here are some shots of both Texas A&M and NC State’s uniforms for the upcoming season. Note that the star pattern on Texas A&M’s uniform appears to be replaced with a block M pattern on Michigan’s uniforms above (click to enlarge).

There are no leaked photos or mock-ups of Michigan’s new tops but given the other adidas releases, it wouldn’t’ surprise to see a similar look.

There’s an additional mock-up circulating the internet from the 2013 Adidas Spring Catalog. The special line of jerseys, titled Bleed Out by Adidas, feature an all maize-on-maize design. The Adidas catalog specifies that the jerseys will be worn during “February & March of 2013-exact dates will be communicated at a later date”.

This line could be similar to the adiZero line that Adidas released last year for March Madness. (Baylor’s image provided for better clarity.)