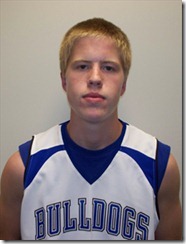 Josh Speidel is a 6-foot-7 sophomore from Columbus, Indiana. He played his AAU ball with Indiana Elite this summer and the 6-foot-7 big man is yet another name on Michigan’s ever-growing class of 2015 watch list. Speidel was in Ann Arbor for Michigan’s football game against UMass. We caught up with Speidel to talk about the visit, his recruitment and more.

How would you describe your game?

I’d probably say that I can post you up if you’re a small defender and that, if it’s a bigger defender I can take you outside and go around you. I’ve also can shoot the 3 and midrange.

Which AAU team did you play for this summer?

How did the summer go for you?

From a team standpoint, it could have went a lot better, I think. Obviously it ended on a high point when I was playing with Indiana Elite One and we went out and won the Las Vegas 64. It was good.

How did the summer go as far as developing your game?

Purdue, Indiana, Xavier, Evansville, Michigan and Butler. That’s about it.

What are you looking for in a  school?

Which coaches from Michigan have been talking to you?

How often do you guys talk?

We don’t talk a lot, but we talked a lot during the visit. That’s the first time I’d actually gotten coach Meyer’s number.

Did you see any of the coaching staff at any of your events this summer?

I love the coaching staff. They were all very welcoming and nice. Also, I love the facilities. It’s a great place, and all the renovations they did, it was very nice.

What did you do during your visit for the UMass game?

They picked us up and we went to their practice facilities. We toured around there. We went to the locker room, their main court, we went to the training rooms. After that we went outside and we went to the tailgate and had something to eat. We sat down and talked to some of the players. Then we went to watch the game. During the game, the coaches were coming around and talking to all of us.

What did you think of the atmosphere?

It was very hype. That was my first college football game. It was very big, very loud and there were a bunch of people there.

What were the coaches talking to you about?

They said they’d be down to go to some open gyms, they talked to my parents a lot. They talked a lot about academics — they’re big on academics at Michigan. They just asked about how my off-season workouts have been, stuff like that.

Did they say when they were coming to watch you?

They said they’d be there next Tuesday.

How did the visit go overall?

It went very well. That was the first time we’ve been up to Michigan. We got to see their facilities. It went really well. I got to learn about Michigan, so that was good.

What other visits have you taken?

I’ve visited Purdue, Indiana’s practice facilities and training room, and I have a visit scheduled for Evansville coming up on the 15th of October.

Who else has been at your workouts?

Evansville and Butler. That’s about it, so far.

Be a fan of Coast to Coast Tickets on Facebook for discounts you can use towards sports tickets, including University of Michigan Wolverines tickets!