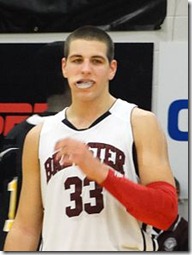 Dan Hanner, who writes for Real GM and has been featured in Basketball Prospectus, has noticed a trend in his 2012-13 computer projections. Hanner’s system has dropped Michigan significantly from his original spring projections. Michigan has dropped so far that Hanner doesn’t think the 2012-13 Wolverines are a top-25 team in the preseason. The reasoning: Mitch McGary’s fall in the recruiting rankings (3 to 26) and Evan Smotrycz’s transfer. Here’s a snippet of Hanner’s explanation:

Evan Smotrycz was Michigan’s under-utilized star. Smotrycz was already super-efficient, and as the only returning Michigan player to be ranked out of high school, his potential was still very high. With fellow three point sharp-shooters Zack Novak and Stu Douglass having departed, Smotrycz seemed poised for a breakout season. His loss pushes a bunch of players with weaker projections into a higher spot in the lineup.

With Mitch McGary plummeting in the recruiting rankings, not only does this lower McGary’s projection, it also has spillover effects to the rest of the team. First, Max Bielfeldt (or Jon Horford) is now likely to play more minutes in the post. Second, the weaker overall lineup hurts everyone. Everyone (from Tim Hardaway to Caris Levert) will likely get fewer wide-open shots, and their ORtg projection falls slightly.

Some quick thoughts. First off, there’s no mention of Glenn Robinson III rising more spots than McGary fell. I would estimate that the gap between a recruit ranked in the 50s compared to the 20s isn’t nearly as large as between top-5 and top-25 but it is surely significant. One of Hanner’s caveats is that Michigan could be a much better defensive team. There’s little doubt that the additions of McGary, Robinson, Stauskas, Horford and others will be a defensive upgrade over Smotrycz, Novak and Douglass.

Hanners take is a bit drastic, but where should Michigan be ranked in the preseason? Many preseason publications have the Wolverines ranked in the top ten or even the top five. We’ve previously reported that Lindy’s has Michigan ranked third and Athlon slots the Wolverines sixth. Blue Ribbon announced its top-25 and has John Beilein’s team pegged as the country’s fifth best team in the preseason.

Whatever qualms you may have with the conclusion, some of Hanner’s points are valid. Michigan loses arguably the top three long range specialists from last year’s team and there is generally a concrete difference between the third best incoming recruit and the 26th best incoming recruit. Last year that would be like comparing #3 Michael Kidd-Gilchrist to #26 Wayne Blackshear. Blackshear played in just 15 games for Louisville while Kidd-Gilchrist was an All-American and lottery pick. That’s obviously a cherry picked example, but there are far more “recruiting misses” outside of the consensus top-10. Blackshear missed time due to injury but the point remains that there’s a vast difference between top-10 level players, game changers like Davis, Rivers, Beal, etc., and perhaps the Branden Dawson, Chane Behanan, Michael Gbinije type of players who might be a level below.

There are a lot of reasons to be excited about Michigan’s upcoming season including one of the nation’s best point guards, a potential bounce back year for Tim Hardaway Jr., legitimate front court depth, and a new level of athleticism that John Beilein hasn’t had at his disposal in Ann Arbor. However, Hanner’s projections should serve as a reminder that as exciting things look on paper, there are still plenty of factors to consider.

Let’s hear your thoughts. What do you expect from the 2012-13 Wolverines? Are we overvaluing Mitch McGary? Or under valuing the departures and transfers from last year’s team.