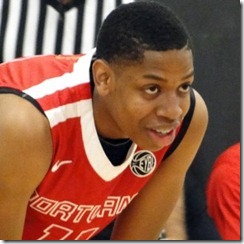 Michigan was at Cal Poly High School last week to watch Kameron Chatman, a talented swingman in the class of 2014. Chatman is a versatile player who stood out for Portland ICP this summer on the EYBL circuit. The 6-foot-7 wing can do a bit of everything with the ball and is already drawing high-major interest and offers from a number of west coast schools. The top-50 prospect talked to UMHoops to provide a quick update about his recruitment, what he thinks of Michigan and more.

I like to get my teammates in the game and work off my teammates. Using the advantages that I have and the size if I have a smaller defender on me probably posting up if I have a bigger defender getting around him and getting up a shot.

How did the AAU season go playing for Portland ICP?

We played int he EYBL, so that was a very tough, brutal league to play in, so the summer was pretty good. We started off well but then ended up not making it to Peach Jam. We went to Vegas and went 6-1 and made it to the semifinals so we did pretty good down there. All in all, it was pretty good summer.

When did Michigan first see you?

I believe it was in Vegas.

And who came to watch you?

What skills were you working on improving this summer?

Just getting stronger and being more of a leader, everything, really. Just more consistency on my shot.

You’ve been compared to Jalen Rose. Is that a fair comparison?

I’ve seen the documentary on him but I’ve never seen him play. A lot of people tell me that, though. So I don’t know.

Which schools have offered you?

UCLA, Washington, Oregon, Arizona and Memphis. I think that’s it.

Outside of those schools, who else have you been hearing from?

Florida State, Michigan, Marquette and Louisville, that’s pretty much it.

Since when have you been hearing from Michigan?

Since July, at the latest.

Have Michigan coaches been around to see you work out this fall?

One of the coaches actually came to a workout for my high school last week, and he talked to my head coach. I didn’t talk to him because I had class.

Do you know if the coaches have mentioned anything about extending an offer to you?

What have the coaches been talking about?

Just taking it slow and worrying about classes. Then they talk about the season going into AAU and how they’ll go from there to see what I have.

It’s academically rigorous there, and they’re in a good conference.

Are you planning a visit to Michigan?