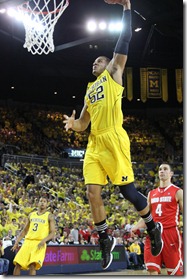 Jordan Morgan’s offensive production regressed in his redshirt sophomore season after the early departure of his point guard Darius Morris. He scored fewer points and was slightly less efficient offensively but that’s not to say his season was a disappointment. In many ways, Morgan was one of the most mission critical pieces of the 2011-12 Michigan team. He was the only true big man and best rebounder on a rebound-anemic squad. His importance is amplified by his teammates’ lack of rebounding chops. His seven points and six rebounds per game certainly don’t overwhelm the statsheet but it’s painful to imagine either of the last two Michigan teams without Morgan in the starting lineup.

2012-13 will bring a new set of challenges for Morgan, who goes from being the only true big man on the roster to one of many in a suddenly crowded Wolverine front court.

Jordan Morgan’s career has taken an interesting path. His recruiting merits were fairly underwhelming and when his redshirt year was marred by harsh knee and shoulder injuries it was tough to expect much of him going forward. Fast forward to the present and he’s started 65 games in two seasons while emerging as the steadying force in Michigan’s interior on two NCAA tournament teams, one that won the Big Ten.

In many respects, Morgan’s improvements during his first three years at Michigan have been extraordinary. He’s transformed his body, stayed healthy, and produce in ways that many wouldn’t have imagined until later in his career. On the other hand, he’s reached a cross roads. Morgan needs to either take the next step or risk getting passed up on the depth chart by more versatile options. McGary is bigger with more athleticism, McLimans has more offensive skill and Horford is a better shot blocker. Morgan is much more of a jack of all trades, master of none. There’s always a spot for a consistent rebounding big man but for the first time in his career, he’s going to have serious competition for playing time.

Morgan’s production is one of the bigger mysteries surrounding the upcoming season because it’s rooted in so many fundamental questions about the entire roster. The questions for Morgan are both internal (how much can he improve?) and external (how good is Mitch McGary, et al.?). It will be hard for Morgan to improve on his pure statistical output given the addition of depth for the Michigan front court but he has plenty of room to improve his game.

I expect Morgan to begin the season in the starting lineup. Whether he sticks there for the whole season is another question. Morgan should still be the rebounder and finisher that we’ve come to expect but I’m taking a wait and see approach to any offensive improvement. His playing time is likely to decrease as the season wears on (opposite of the last two years) and John Beilein narrows his rotation. I actually hope his 2-point shooting numbers fall a bit below his career mark of 62% as that will mean that he’s expanded his offensive repertoire, It’s tough to assume improvement in free throw shooting (sub-60% both seasons) but expect his offensive (11.9%) and defensive (17.8%) rebounding rates to remain steady in his junior year.