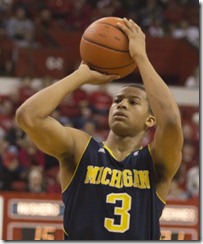 Expectations for the 2012-13 Michigan basketball team continue to grow.

The latest to join the hype? The Sporting News ranked Michigan fifth in its preseason top 25 rankings.

Michigan’s lofty rankings seem to be near consensus across major services as Sporting News is now the 6th service to project the Wolverines as a top ten team:

While there are certainly contrarian view points, such as Dan Hanner’s speculation that Michigan might not be a top-25 team, the national media continues to praise the Wolverines. At the very least, Michigan is a top ten team and by most measures the Wolverines are flirting with top five status.
Michigan opened last season ranked 18th and managed to maintain a top 25 ranking throughout the season. The Wolverines saw their ranking surge as high as 10th and as low as 25th but never dropped completely out of the top-25 poll. Michigan never managed to break that top ten barrier, something that hasn’t been done in Ann Arbor since 1997 when the Wolverines were ranked 8th.

Michigan shared the Big Ten Championship last season but suffered a NCAA tournament opening round upset to Ohio, ending the season on a down note. The Wolverines lose captains Zack Novak and Stu Douglass as well as transfer Evan Smotrycz but introduce a talented freshman class featuring top 100 prospects Mitch McGary, Glenn Robinson III and Nik Stauskas. National media seems to equate the loss of leadershp and subsequent upgrade in talent as a net gain for the Wolverines. With less than one month until the first exhibition game where would you rank the 2012-13 Wolverines?