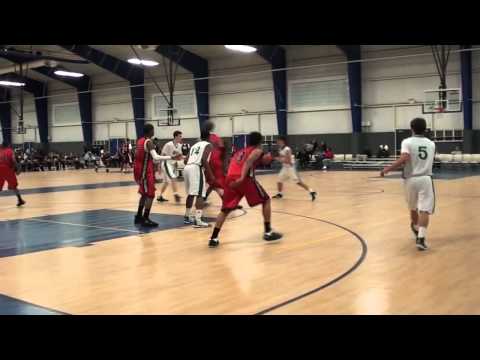 Evan Boudreaux is a 6-foot-7, 15-year-old phenom out of Lake Forest, Illinois. Boudreaux played up for Team NLP at both the 16 and 17U agre levels during AAU ball and impressed coaches from around the country. According to Boudreaux’s father, the talented big man has interest from Boston College (offer), Northwestern (offer), Wisconsin, Iowa, Stanford, Michigan, Purdue, Harvard, Notre Dame, Virginia and many others. John Beilein was in to watch Boudreaux workout last week and the 2015 prospect is planning to visit Ann Arbor on Homecoming weekend for Michigan’s football game against Illinois. We caught up with Boudreaux to talk about his recruitment, what he thinks of Michigan and more.

I would definitely say I’m more of an inside-out type player. I think I do a really good job of taking advantage of the mismatches and I think I can take guys down low as well as take them out on the wing. So I think that’s a pretty good summary of my game.

How did playing for the Team NLP 16U team go this summer?

What skills were you working on?

This summer I was working a lot on my ballhandling and being more of a consistent shooter. I also want to be able to defend more than one position on the court.

Who do you hold offers from at this point?

I have official offers from Boston College and Northwestern.

When will you be visiting Michigan?

Which Michigan coaches have you been talking to?

I’ve talked to coach Jordan, and then I had coach Beilein come up and watch an open gym last week.

How often do you talk to coach Jordan?

I give him a call every couple weeks, just to check in.

What do you guys talk about?

Coach Jordan, you know, he’s trying to sell me on Michigan. He does a good job of it. He tells me that he’s really interested and that he likes where I’m at and he likes my potential. He’s looking forward to watching me play and getting me on campus.

What do you think of the coaching staff as a whole?

I think they’re great. Obviously, Matt Vogrich came out of Lake Forest and he went to Michigan and he speaks very highly of them. So far, everything’s been great. I really think the coaches, they’re a great staff out there and they really put their players in a great position.

I really like their style of play. I like that they’re in the Big Ten, the Big Ten is a great conference. I think that coach Beilein’s done a great job up there in recruiting players and getting a program up to the top of the Big Ten.

Where have you visited so far this fall?

I took a visit up to Stanford, Iowa and Boston College. I’m heading up to Michigan and Northwestern later in the month.

Stay tuned for more in the coming days about Boudreaux’s recruitment, how his game blossomed this summer, and where Michigan stands in relationship to other schools on his list.