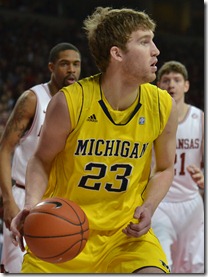 Over the coming days and weeks we’ll be debating the 2012-13 Michigan basketball team with a number of people that cover the team daily. In a new feature called Ask the Beat we reached out to Michigan basketball beat writers to answer some of our questions about this year’s team. Rod Beard of the Detroit News, Nick Baumgardner of MLive.com, Joe and Rob White of iSportsWeb  all agreed to join up. Our first question looks at which of Michigan’s departing rotation players will be missed the most this year.

Which departing player – Zack Novak, Stu Douglass or Evan Smotrycz – will be missed the most in 2012-13?

Rod Beard (Detroit News): Probably Novak, obviously for the leadership. He was a vocal leader and wasn’t afraid to get riled up to try to motivate the team. They played for him and after the loss to Ohio in the NCAA tournament, the players were disappointed that they didn’t win a game for Novak and Douglass. The big question mark is whether someone else will be able to fit into that role — probably not — but Novak was a unique player and leader and it’s too hard to try to replace. This group may not need an emotional leader in the Novak mold, so they’ll have to figure out what they need and try to be that type of leader. Smotrycz provided some versatility, but with the arrival of Robinson, Stauskas and McGary, they’ll be able to make up for it.

Douglass was a fine complimentary leader, but that was always Novak’s team — no question about it. Players looked to him for motivation and all those things you want from a captain at some point in just about every game. Michigan just can’t replace that. Few teams could, to be honest.

I’m not sure Michigan will find a singular leader inside its locker room this season, and it certainly won’t find one as polished at the skill as Novak was. It’ll likely take a team effort to replace what he brought to the table.

Smotrycz is an underrated loss, to a degree. He completely disappeared when the schedule got tough last season, but just having the threat of a 6-foot-9 four or five-man who could knock down the 3 was something teams had to always prepare for.

They absolutely won’t this season.

Joe White (iSportsWeb): I’ll start by saying that I don’t think they’ll miss Evan Smotrycz at all. He disappeared during Big Ten play last year, lost all confidence, and simply needed a fresh start that he wisely sought out.

The easy answer to the question is Novak, because his leadership was so obvious. But as much as he led with his heart on his sleeve, Douglass was just as important, especially after losses. Novak was nearly inconsolable after his team lost while Douglass would put a smile on, address the media with poise, and assure us all that the team was still headed in the right direction. Both styles of leadership will be sorely missed but since we’re having the discussion, and since Novak produced at a higher statistical level throughout his career, I’m going with the easy answer: Zack Novak.

Dylan Burkhardt (UM Hoops.com): I’m going with a different answer here. Zack Novak’s extraordinary leadership can’t be over appreciated or undervalued. It meant everything for Michigan last year. As Rod, Nick and Joe stated above, it’ll be nearly impossible to replace and will require a leadership-by-committee approach. From a purely basketball standpoint, I’m a bit more concerned about losing Stu Douglass.

Defensively, Douglass might have been the most important Wolverine a season ago. Douglass averaged 33 minutes per game last season because he was hands down Michigan’s best perimeter defender. He could play on the ball, off the ball and was willing to work on the defensive end. Losing Douglass’s perimeter defense will be a significant blow because there’s not a natural option to replace him. Trey Burke has the quickness but asking your best offensive player to be your best defensive player is a massive burden. Hardaway has never been known for his defensive abilities and shifting toward guarding quicker players at the two isn’t likely to help. Matt Vogrich and Nik Stauskas are two likely candidates to replace Douglass’s perimeter shooting but neither are suited to fill a defensive void. Freshman Glenn Robinson III has the quickness, strength and athleticism to defend nearly every position on the floor but he’s just that, a freshman. It’s very rare that any true freshman arrives on campus ready to be a lockdown defender.

There’s been plenty of talk about front court depth and athleticism and this being one of John Beilein’s best defensive teams but don’t overlook the loss of Michigan’s most experienced and steady perimeter defender. John Beilein might be a bit concerned as well, reports are that Michigan’s been working almost entirely on the defensive end throughout off-season workouts.