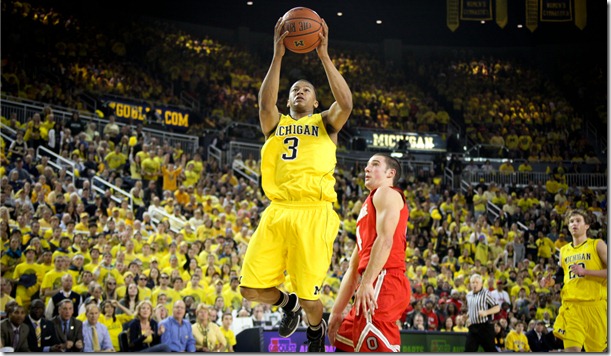 Over the coming days and weeks we’ll be debating the 2012-13 Michigan basketball team with a number of people that cover the team daily. In a new feature called Ask the Beat we reached out to Michigan basketball beat writers to answer some of our questions about this year’s team. Rod Beard of the Detroit News, Nick Baumgardner of MLive.com, Joe and Rob White of iSportsWeb all agreed to join up. Our second question looks at Michigan’s pace and what we should expect from the Wolverines.

Previously: Which departure will be missed the most?

Trey Burke says he wants Michigan to run this season but promising to play faster is one of the most stereotypical off-season empty promises in college basketball. Will Michigan, one of the Big Ten’s slowest teams under John Beilein, play at a faster tempo this season?

Rob White (iSportsWeb): This might surprise some folks, but John Beilein likes his teams to run. When the opportunity presents itself, expect Burke to push the tempo. Michigan has the athletes to be a good transition team. Jordan Morgan is an explosive dunker, Tim Hardaway Jr. is good in the open court and Tre Robinson is a gifted athlete.

This edition of U-M Hoops will be long, athletic and the most talented team Beilein has had since coming to Ann Arbor. They will be led by one of the top point guards in the country and he will have the green light to run.

They’re not going to be a run and gun team, but there will be elements of that in the offense. During his sophomore season, Darius Morris was effective at getting Michigan into the open court for easy buckets. For examples of that, look no further than their two NCAA tournament games that season. Fast forward to Trey Burke, who is going to be surrounded by a more athletic team than Morris was, and you can see the potential for some uptempo offense.

Rod Beard (Detroit News): With the versatility of the roster, they’ll be able to employ a lot of different tempos. I expect the starting lineup to be Burke, Hardaway, Robinson, McGary and Morgan. But, there will be times when it’s Burke, Hardaway, Stauskas (or Vogrich), Robinson and McGary — and that’s a team Beilein can use to run and raise the tempo. They can go big or small and not lose much in terms of skill and talent. With being able to pound the ball inside and shoot from outside, as well as penetration from Burke, Hardaway and Robinson, there will be plenty of opportunities to run. But defense will be important as well. If that group can create turnovers, they’ll obviously have more chances to get out on the fast break, which could turn out to be one of their strengths.

Nick Baumgardner (MLive.com): Only if its defense allows it to.

Beilein’s teams aren’t going to grab the ball out of the net and whip four passes down the floor without a dribble after every made basket. It just won’t happen. Defense will have to create transition opportunities, otherwise, it’ll likely be more of the same as far as tempo goes, I’d have to guess.

However, unlike years past, this team has the athletic makeup to possibly create more fast-break opportunities from the defensive end, just because of its length.

If you insert Glenn Robinson III and Mitch McGary into the starting lineup in place of Stu Douglass and Zack Novak, suddenly you’re a lot longer. You’ve got a 6-foot-6 and a 6-foot-10 guy with arms in passing lanes rather than a 6-foot-3 player and a 6-foot-4 power forward. If the Wolverines can get deflections in traffic, block more shots and have a firm presence on the glass — then, yeah, they can run a lot more.

Dylan Burkhardt (UM Hoops.com): John Beilein’s teams have slowed the tempo down consistently since he arrived in Ann Arbor. Last year’s squad was the second slowest in the Big Ten and that’s just because the slowest Division I team in the nation resides in Madison, Wisconsin. Three major conference teams played slower basketball than Michigan last season: Virginia, South Florida and Wisconsin. Michigan wasn’t just fairly methodical, the Wolverines deflated the basketball. Half of Michigan’s Big Ten games were played at less than 60 possessions last season and the Wolverines were effective in those slow games, winning 13 of 16 sub-60 possession contests on the season.

The recipe worked last season but the common argument is that Michigan’s new personnel will dictate a faster tempo. Michigan has a great point guard, a pair of athletic wings and even big men comfortable winning the floor. Why wouldn’t they run?

I love Michigan’s options as much as the next guy but John Beilein isn’t going to change everything overnight. Michigan already forced turnovers more often than any other Big Ten team last season, so its unlikely that there will be significantly more defense into offense opportunities. I do expect U-M to be more aggressive and effective when forcing the issue off of turnovers, and it’s also likely that the Wolverines will create more live ball turnovers (U-M ranked 9th in steals and 12th in blocks). However, I don’t envision either of those improvements being so radical that they change the look of this team.

Look for the greatest increase in tempo to be off of clean defensive rebounds. Not only should Michigan be a better defensive rebounding team, the emphasis will be on being forcing the issue in those situations and pushing for easy points. Get the ball to Burke and have people running the floor looking for an easy opportunity or a secondary break.

Beyond that, I don’t expect a radically different offense. Michigan’s half court sets aren’t going to change dramatically and we won’t see many, if any, track meets in Crisler Center. Michigan will play at a faster rate than 61 possessions (59 in Big Ten games) per contest, but I’d be surprised if that number crept above last year’s Big Ten average of 63 possessions per game.