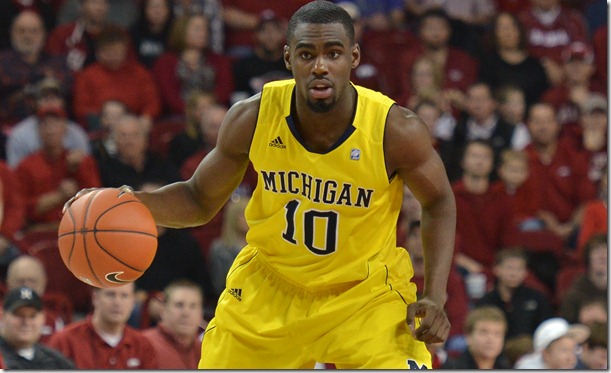 Over the coming days and weeks we’ll be debating the 2012-13 Michigan basketball team with a number of people that cover the team daily. In a new feature called Ask the Beat we reached out to Michigan basketball beat writers to answer some of our questions about this year’s team. Rod Beard of the Detroit News, Nick Baumgardner of MLive.com, Rob and Joe White of iSportsWeb all agreed to join up. Our fourth question looks at Tim Hardaway Jr.’s transition and ability to bounce back from a sophomore slump.

Previously: Which departure will be missed the most?, Will Michigan be an uptempo team in 2012-13?, Which freshman will have the greatest impact?

This is a big season for Tim Hardaway Jr. He wants to play the two, rather than the three, but also needs to regain some of his freshman shooting abilities. How do you see his year playing out?

Rod Beard (Detroit News): Hardaway’s move to shooting guard will be one of the biggest changes that helps this year’s team. At 6-6, he’ll be a mismatch for some of the guards in the Big Ten and could provide some rebounding help. He’s been somewhat of a streaky shooter, but with help on the wing in Robinson, he won’t feel the need to shoot as much, which will help him focus on taking better shots. He had a special freshman year and it’ll be hard to repeat that, but if he’s more efficient this year, that will be more help for this team. Hardaway will have another good year, though his scoring average may dip with more offensive options. But, that’ll also help in keeping him around for his senior season instead of testing the NBA waters.

Nick Baumgardner (MLive.com): I think he’ll be fine from a shooting standpoint, if only because he can’t really shoot any worse from 3-point range than he did last year — 28 percent is pretty bad.

He does seem more comfortable with his role and his environment, though. Before last year started, all the talk focused on how he’d handle being the No. 1 option on this team, could be be a late-game closer, a big-time scorer and would he jump early to the NBA?

This year, it’s about how can he adjust going back to his natural position, and what can he do to help ease some of the load off of Trey Burke.

He was asked to do some things early last season that clearly he wasn’t ready for. Burke eventually took over more of those responsibilities, and once Hardaway figured out he didn’t have to gas up the team bus, cook the postgame meal and fly the airplane every night — he was fine.

People sort of forget that in his last nine games last season, he was a 45-percent shooter from the floor — and shot 36 percent from 3, eight points higher than his woeful season average.

There will also be more shots to go around this season. And from a percentage standpoint, that might help Hardaway.

He hasn’t turned into the player people thought he might be after his freshman season (not yet, anyway), but he’s not a trainwreck either.

His ball-handling still needs to improve, and he has to become a better defender. But if he averages 15 points per game again this season, and turns that final nine-game stretch into a full season, Michigan should be more than happy.

It’s all mental with Hardaway, though. He has to prove he can handle the ups and downs that go along with being an upper-echelon player in this league — and really, everything centers around that.

Joe White (iSportsWeb): Two things to me are critical for Hardaway.

1) He had a lot of ‘ghost moments’ last year where he was on the floor for long stretches but you never noticed. He has to be active all the time. The team is deeper this year so he should be able to burn energy, get his rest, and do it all over again. He can spark himself with more consistent defensive play as well. He has the ability to be a game-changing defender if he wants to be.

2) His ball-handling was stronger last year but still needs a lot of work. He gets stripped in the lane far too often and just doesn’t seem to have great hands on the catch and dribble. If he puts the work in on those 2 areas he is going to be an absolute monster to deal with for the opposition. I think his shooting woes last year were a byproduct of being disengaged defensively, and sometimes mentally. If he wants to go where we all know he wants to go, he needs to find the killer instinct for 40 minutes, not just the last 5. With a lot more talent on the roster this year I don’t necessarily expect a huge spike in his numbers, but I do expect his efficiency to rise, and for him to become a more valuable 2-way player.

As far as 3-point shooting goes, I firmly believe Hardaway will get back to somewhere around his freshman year numbers. This stands to reason based on the new talent surrounding him — he’ll take fewer shots while getting better looks at the basket. Nick’s point about the significant uptick in Hardaway’s numbers later in the season is well-taken. To me, that trend indicated Hardaway shoots better when he isn’t expected to carry the whole scoring load. He definitely won’t be asked to do that this year.

I see this is year as an opportunity for Hardaway to work on expanding his offensive game. When people think of Hardaway, they think of his 3-point shooting ability. But the truth is, he was pretty good last year from inside the arc, making 54 percent of his 2-pointers. I look for Hardaway to create separation off the dribble for good midrange looks, as he’s been able to do throughout his career, and use his quickness to get by defenders. The problem for him has always been his handle, which sometimes makes him a turnover liability, and other times prevents him from finishing strong at the rim. I think he will be stronger in those two areas and become a more consistent player because of it.

The wild card, as always with Hardaway, is his attitude. It’s impossible to say how he’ll react to his first 2-for-12 game from beyond the arc, or his first 7-turnover game. I think he learned a lot about being a leader from Zack Novak, but it’s time to put those lessons into action. This young team needs him to keep a level head in order to lead them, and he knows that.