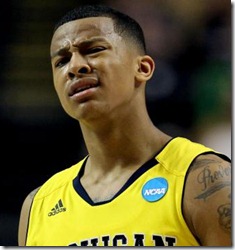 Over the coming days and weeks we’ll be debating the 2012-13 Michigan basketball team with a number of people that cover the team daily. In a new feature called Ask the Beat we reached out to Michigan basketball beat writers to answer some of our questions about this year’s team. Rod Beard of the Detroit News, Nick Baumgardner of MLive.com, Rob and Joe White of iSportsWeb all agreed to join up. Our fifth question looks at preseason prognostications and what to expect from this group in 2012-13.

Previously: Which departure will be missed the most?, Will Michigan be an uptempo team in 2012-13?, Which freshman will have the greatest impact?, What to expect from Tim Hardaway Jr.?

What’s the ceiling for this team and what should be the goal? Pundits have Michigan slotted anywhere from the top-5 to out of the top-25. How would you rank this team?

Joe White (iSportsWeb): The ceiling is a National Championship. This team has that kind of talent and the coaching to pull it off. March Madness is a crazy time though and once a team gets in, all bets are off, good or bad.

I agree with the coaches in that the goal should be repeating as Big Ten Champions. Accomplishing that within the current state of this league is a monumental goal.

Ranking this team is up for heated debate. That’s the most thrilling part of rolling out a roster that has 3 high profile freshmen who eat lots of minutes – nobody knows the answer to how good they’ll be. With Zack Novak and Stu Douglass gone, the leadership agenda falls on some new faces. How Trey Burke, Tim Hardaway Jr., Jordan Morgan and company encourage the young guys to step up and play team-oriented ball on offense and selfless defensively will go a long way toward determining this team’s fate. Not just that though, these same ‘leaders’ will need to buy into those same philosophies personally as well before they can pass them on to the others.

From my standpoint, I think they will finish in the top 3 in the Big Ten, will probably hover between #8-20 in the rankings most of the year, and become a top 5 seed in the NCAA tournament.

Right now, I would rank Michigan 15th nationally. I just have to see the freshman first before I go higher.

Rod Beard (Detroit News): The ceiling is the national championship — seriously. This team could be that good, if everything comes together and the new pieces fit nicely with the veterans. I’m guessing the goals will be to repeat as Big Ten champs and get a couple of wins in the NCAA Tournament. Michigan has played under the radar and surprised some people the past few years, being picked to finish at the bottom of the Big Ten two years ago, and not in the top three last season. This year, they’re picked right up near the top with Indiana and Ohio State and will have to live up to higher expectations. They’re a top-10 team this year, definitely, but I’ll reserve further judgment until they play a few games and we can see how they jell early.

We don’t know how the group will mesh on the court, we don’t know how they’ll get along off it when the season gets tough. But, let’s say all of that gets along fine and these guys live up to their recruit potential, then I’d say Michigan’s ceiling is as high as some are making it out to be — if everyone stays healthy, and you have little to no adversity, then yeah, Michigan (on paper) is capable of making a run at that Regional Final appearance with a chance to play in the Final Four.

It’s the NCAA Tournament — anyone with high-end athletes, shooters and an elite point guard can say that right now.

But that’s one end of the spectrum. It shouldn’t be the expectation. Because, as I just explained, there’s just way too many question marks right now to be that bold (or maybe I’m a chicken … maybe it’s both).

In terms of goals, Michigan’s goal should be to win the Big Ten regular season again (which will be even more difficult this season), and to get past the Round of 32 for the first time under Beilein.

Anything more than that, I think, is gravy. Anything less should go down as a failure.

Joe Stapleton (UM Hoops.com): Right now, I would rank Michigan somewhere around 15. The fact is, all we know about the freshmen is what we’ve seen in recruiting videos. Given that three of the freshmen (McGary, Robinson III and Stauskas) will see significant minutes, until we see them on the court there’s very little certain you can say about how good this team will be.

I think the main component of this team people are underestimating is the loss of Zack Novak and Stu Douglass. I know it sounds strange with all the talent coming in, but those guys gave the team a lot more than what showed up on the court. Especially given how young the team is, I can see the Wolverines missing the steady emotional state of Douglass and the energetic, never-quit leadership of Novak. I’m not sure if the situations are entirely comparable, but think back to the 2008-2009 season. That team lost two players, David Merritt and CJ Lee, neither of whom were that impactful on the court but both of whom provided real leadership. That team struggled for many reasons, but I think losing those two guys was one of the big ones. Good leaders affect how a team reacts to obstacles ranging from how a team responds to getting punched in the mouth early in a game they’re supposed to win to how two teammates work out a beef. These kinds of things matter, especially on a team with a lot of young contributors.

Now that your buzz for this season has been killed, let me also say I think Michigan’s ceiling, if everything falls into place, is the Final Four. The goal should be a Big Ten title, but the season won’t be a failure, in my opinion, if they don’t win it — the conference is just too good for such a black-and-white stance. They can finally say they’re as talented as pretty much any team in the country and if everyone plays the way Beilein wants them to play, they could be good. Very good.