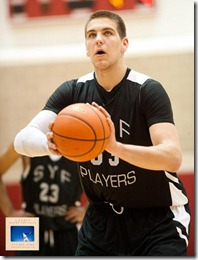 Mitch McGary might have slipped in the recruiting rankings but he’s still the gem of Michigan’s 2012 recruiting class. By selecting Michigan over the likes of Duke, Florida and North Carolina last November, McGary became an instant celebrity in Ann Arbor before he’d set foot in the city more than a couple of times.

Rational expectations for McGary are hard to define due to his dramatic rise (to number 2) and subsequent drop (to the mid-20s) through the recruiting charts. Is McGary the player that dominated the summer AAU circuit in 2011 or the one that struggled to score the ball at Brewster Academy in his final prep season. There’s more than enough video of both players to comb over but making sense of McGary’s future isn’t easy. The reasoning and rationale behind McGary’s rise and fall by national scouts can be debated forever but at this point it doesn’t matter anymore. McGary is in Ann Arbor and it’s time to figure out how he fits into the 2012-13 Michigan roster.

Mitch McGary isn’t going to set foot on campus and average 16 points and 10 rebounds per game. He’s not Jared Sullinger or Kevin Love. He might not be a top ten prospect but he’s the sort of player that Michigan has lacked for a long time. He’s a 20-year old freshman and might have been a bit overweight in his final season at Brewster. He doesn’t have the most refined back to the basket game and he’s probably not the sort of player that John Beilein will design his whole offense around.

On the other hand, he’s bigger and stronger than any other player on Michigan’s roster. He’s versatile enough to fit in John Beilein’s offense while providing the sort of ability around the rim that Michigan has lacked so clearly in recent seasons. He should have, almost single handedly, the ability to pull Michigan out of the conference basement in statistics like blocks, steals and rebounds. McGary’s presence in the middle of Michigan’s lineup should transform the Wolverines into a different style of team, on both ends, almost instantly and provide the firepower necessary to compete in the Big Ten.

Michigan fans want and expect Mitch McGary to be a star but patience might be the key.

McGary isn’t going to hunt to take away shots from Trey Burke or Tim Hardaway Jr. and he could even come off of the bench as a sixth man to start the season. Even if he goes through his freshman season as reincarnation of Zack Novak, without the three point shot but with an additional six inches and 40 pounds, that’s probably not the end of the world either.

McGary will score some points and probably make two or three “wow” plays per game. Early on in the season, he’ll probably have his fair share of “what is he doing” plays as well. Integrating McGary into the Michigan system might be as hard on John Beilein as it will be on McGary. I can’t think of a player quite like McGary that John Beilein has coached. Controlling the big man is a precarious situation because you don’t want to handcuff the elements that make him such a dynamic player.

I expect around 25 minutes per game, maybe closer to 20 start the year, sprinkled between the four and the five. McGary will have opportunities and should earn plenty more as the season wears on. He might not be a double digit scorer, but a defensive rebounding rate over 20% and an offensive rate over 10% (which would both put him around top 6 or 7 in the league) should be expected.