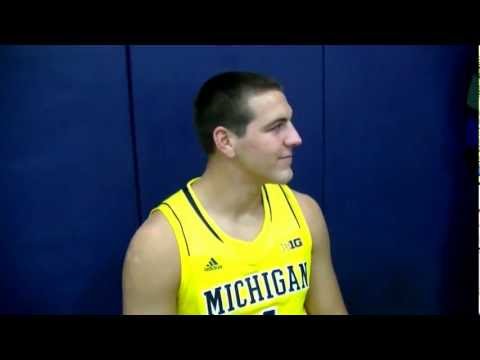 Incoming freshman Mitch McGary was one of the most sought-after players during Media Day. He talked about how the upperclassmen have helped him transition to the college game, what he expected versus what he’s experienced and more. You can watch McGary in the embedded media player below or read the full transcript after the jump.


On if his experience thus far is what he’d imagined:

I’m used to playing alongside high-level guys, coming from prep school. Practices were very similar, but here they’re a little more strict, less lenient, you can’t get away with some stuff. A lot of defense.

On his on expectations:

Honestly, we are just going to take it one step at a time and work as a team. Hopefully, we get better as a team every day.

On thinking about the NCAA tournament, Big Ten Championship:

At the back of everyone’s mind, yes [we think about that], but I don’t want to shoot out any expectations or predictions. We’re just going to work as a team every day and try to be Big Ten Champions.

On if he missed playing against Bielfeldt:

Max and I are really good buddies. It’s funny how we’re all from the same area and from the same travel team. Reuniting with him, we’ve got some old jokes and an old-school friendship, so it’s been good.

On whether the transition been harder or easier than he expected:

School-wise, harder. Basketball, it’s been a lot tougher, but I’ve been disciplined. The head coaches have been, like I said, stricter, so it’s been really good for school and basketball.

On what’s been toughest:

On the personal significance of taking number 4:

My high school number has always been 5, 33 was prep school and AAU. 33 is retired and 5 is my teammates’ [number]. I just decided on 4. It’s big shoes to fill when it’s Chris Webber’s number, but I’m just going to wear his number and hope for the best.

On if there’s anything about Beilein’s system that makes it easier to transition from prep school to college:

Well in his system, the four and five man touch the ball a lot and are always intertwined in the system, so that’s going to help. Just being able to be a part of the system and put forth the effort into the team.

On whether he’s doing some of the things he did in prep school now for Michigan:

I think so. I think the coaches will give me some freedom a little bit. But with that freedom, I have to take care of the ball and not turn it over.

On the ready-made chemistry he has with Glenn Robinson III, Spike Albrecht and Max Bielfeldt:

I call it like a community, pretty much. Right when we got here, I’ve always had chemistry with Glenn, and with Spike and Max from the same program. Glenn and I have this sort of telepathy type deal where we always know where we’re at on the court even if we’re not looking. That’s just how we’ve been playing for the last three or four years. I think that’s helped in the practices so far, but just overall meeting all the guys and creating that bond right away is very nice and cordial, they’ve been good to the freshmen so far.

On how the upperclassmen have helped with the transition:

Josh (Bartelstein) has done a really good job with that. I mean, he took me under his wing off the court and on the court. Just welcoming me in last year when I came up for a visit, him and Zack. I hang out at their house all the time now, just kick it, playing XBox with the guys. On the court, Jordan (Morgan) and Jon Horford have helped me learn new skills and new tricks.