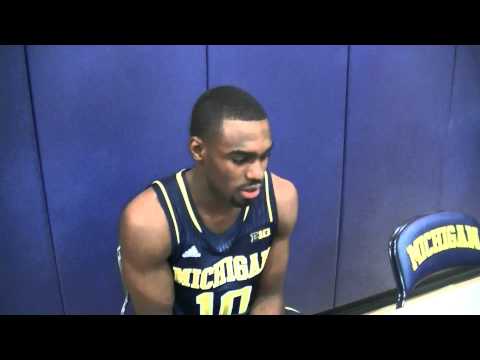 With practice just days away, tThe Michigan basketball team met with the media this afternoon as part of its annual Media Day. Tim Hardaway Jr., Michigan’s No. 2 returning scorer, discussed expectations, his off season work and how he’s helped Michigan’s talented freshmen adapt to Ann Arbor. Watch Hardaway’s comments in the embedded media player below, or read a full transcript after the jump.


On the work he’s put in this summer to improve:

“Individually, just having opportunities to go to camps with my teammate and just going out there and seeing the work ethic that everyone else throughout the country puts in to get better as a player and what they can do to help their team out and benefit their team any way that’s possible. Just finding out new ways to see what everyone else does across the country and just having fun out there.”

On the move from sophomore to junior:

“It just flies by really quickly. I’m a junior already, and I’m just trying to have as much fun as possible while I’m in college.”

“I don’t think it’s a goal for just myself. Everyone on this team is capable of fulfilling that role. We have great seniors, juniors, sophomores, you know, players that are here and have been here before and been in that situation last year. Just learning from Zack and Stu, everyone has sort of that want it attitude and just trying to do whatever they can to help the team in any way possible.”

On being intimated by living up to Novak’s leadership:

“I said it before. It’s tough filling those roles that Zack and Stu had. Those were people who were big influences on Michigan basketball and the Michigan basketball program. It’s going to be hard, but whoever takes the opportunity of being the captain of this team, it’s an honor and a privilege.”

On taking on the leadership role already:

“It really doesn’t matter. Whatever coach Beilein wants me to play. I’ve kind of played both positions pretty well, so whatever he wants me to play, I’ll be fine with it.”

On the preseason rankings:

“It’s very cool. It just shows how much hard work everyone on the team has put into getting to this position right now. We’re not going to stop working. We’re going to keep working as hard as we can just like we were underdogs. Just go out there and have fun. You can feel it, obviously. It’s great and all, but you still have to go out there and execute, play ball, and just try to have as much fun as possible.”

On whether or not the team has the talent to do that:

“I think everybody has that talent. Everyone around the country has the talent to be there right now. I just feel like everyone needs to go out there and just do what they can to be successful.”

On whether or not Michigan is a top-5 team:

“I think we’re a great team. We have a lot of talent. We’re going to go out there and just play our hardest and play our best.”

“The freshmen are very humble. They’re doing a great job in here trying to get better as players, as individuals, and just doing whatever they can to help the team out, which is good for incoming freshmen.”

On what he’s been doing to get the freshmen acclimated:

“A lot of incoming freshmen have trouble with coach Beilein’s plays, and just coming in here and helping them out and show them the ropes a little bit. Showing them around school, around campus, how things work, how to manage their time. They’re doing a great job of it. Like I said, they’re humble kids and they’re doing whatever they can to make this team better.”

On whether or not there’s one freshman he;s taken under his wing:

“All of them are under my wing. I do talk to Tre Rob (Glenn Robinson III) a little bit more because just from the background that we have. Just trying to take care of him, that’s all.”

On what he’s worked on in the offseason: